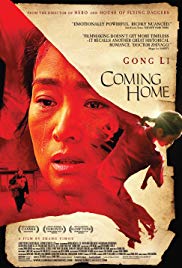 Storyline:
Lu Yanshi (Chen Daoming) and Feng Wanyu (Gong Li) are a devoted couple forced to separate when Lu is arrested and sent to a labor camp as a political prisoner, just as his wife is injured in an accident. Released during the last days of the Cultural Revolution, he finally returns home only to find that his beloved wife has amnesia and remembers little of her past. Unable to recognize Lu, she patiently waits for her husband’s return. A stranger alone in the heart of his broken family, Lu Yanshi determines to resurrect their past together and reawaken his wife’s memory.
Written by
Anonymous
User Reviews: By ‘simple pleasures’, I don’t mean that in any way to reference the Chinese Cultural Revolution, but his return to simple films, about simple people, beautifully crafted, acted, and very revealing about everyday Chinese life (as much as he is able).

Zhang Yimou (Chinese names put the surname first, IMDb doesn’t, alas) is arguably one of the best directors of the 20th and early 21st centuries (best known in the West for House of Flying Daggers). He always evokes a magical feeling in me, and I love his technique and precision; almost every frame is a painting. He chose to remain in mainland China and has walked a very thin tightrope in making the kinds of films he has, as he does not shy away from the political situation in China, at least as part of everyday people’s lives, which it is, of course. His films are just not primarily about Chinese politics (although his simple, but great early film, The Story of Qiu Ju, is about Chinese bureaucracy, and was indeed banned for a time. The fact that Gong Li, in this film, screams to the prison officials that have come to capture her husband, "What did you do to him to make him want to escape?", turning the blame for his prison escape back onto them, illustrates what their intl fame allows them to get away with.

Gong Li, Zhang Yimou’s ex-wife, is, I believe, the premiere female actress in China (and now known worldwide, since the wonderful film, Raise the Red Lantern, was nominated for an Oscar in 1990), with good reason, and an actress of incredible breadth and depth. Even though she has been on many ‘most beautiful people’ lists, (she is very made up here (or down!)), her craft is everything and I cannot watch her enough. She is lately known here for Memoirs of a Geisha, as the evil Hatsumomo.

I was very, very glad to see Zhang Yimou and Gong Li reunite, professionally, for 2 recent films. They seem to push each other upward and she makes a perfect muse for him.

Ah, the film…(I love telling people about them!). Coming Home is about a couple dealing with and trying to reunite after Gong Li’s husband is imprisoned for a couple of decades during the Cultural Revolution in China. She grows progressively ill, which adds to their difficulties, thus the meat of the movie is about their reuniting difficulties. Definitely without a stock Hollywood ending! I was struck by one very incredible scene… It is just a walk across the kitchen by Gong Li, when her husband is knocking at her door. She has been warned severely by the police. This walk seems to take several hours as she haltingly walks across the floor, with all the ramifications, both political and personal, flashing across her face and obviously in her mind. It is one of the most astonishing 20 seconds of film I think I have ever seen, and done without dialog, melodrama or Hollywood artifice.

Zhang Yimou has crafted a fine film here. It is slow, but in a good way, which builds a lot of emotional suspense. Someone said it only covers the last 20-30 pages of the book upon which it is based. As usual, every aspect of the film is top notch and it walks on the edge of the dramatic sword in a perfectly balanced manner. It will go down as another of my favorite Zhang Yimou movies. Be patient, although the tension he creates will keep you pinned, if not a bit frustrated, but that is also the beauty of it, and enjoy! And check out some of his other films!

Storyline:A look at the lives and interactions of a group of friends living in New York.User Reviews: I saw this movie at the Marfa Film Festival 2014 and really liked it. It depicts several characters reeling through...

Storyline:The story of Juan Pablo Duarte, founding father of the Dominican Republic, from his struggles for Dominican independence to his exile at Venezuela in the final years of his life.User Reviews: