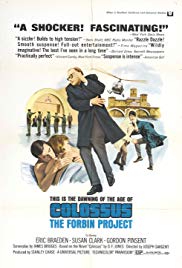 Storyline:
Forbin is the designer of an incredibly sophisticated computer that will run all of America’s nuclear defenses. Shortly after being turned on, it detects the existence of Guardian, the Soviet counterpart, previously unknown to US Planners. Both computers insist that they be linked, and after taking safeguards to preserve confidential material, each side agrees to allow it. As soon as the link is established the two become a new Super computer and threaten the world with the immediate launch of nuclear weapons if they are detached. Colossus begins to give its plans for the management of the world under its guidance. Forbin and the other scientists form a technological resistance to Colossus which must operate underground.
Written by
John Vogel <[email protected]>
User Reviews: It’s interesting reading the comments of those who dislike this movie; they either call it "dated" and so disregard it, or "ludicrous" in that it could never happen; that way they don’t have to take the concept seriously and so aren’t threatened by it.

Well, History is dated. That’s why it’s history. And we learn history supposedly so that we won’t repeat the mistakes of the past (I wonder if that’s ever worked?).

Science Fiction, if done well, is like watching future history. Star Wars begins with "Long, Long Ago…" and yet the world it presented was thousands of years ahead of ours. Science Fiction’s best use is often in producing cautionary tales so that "We Don’t Go There", or at least make us think before we do. Yes, the idea of a computer taking over the world through control of nuclear technology is ludicrous; very ludicrous. Until it happens. Then it is already too late. That’s the point of science fiction and other cautionary tales.

So Collosus is about a dated computer that becomes sentient and starts asserting ruthless control for what it sees as the "betterment of mankind". What does it matter if the technology is dated? Our technology will seem hopelessly dated 100 years from now. This movie is very much like Terry Gilliam’s dark movie, "Brazil", in a strange way. Gilliam has said his movie was a cautionary tale, that the only escape from the world is in your imagination. Both movies make the same point: that if a certain process (government, or technological) is allowed to continue without safeguards, we will reach a point where there is no escape. The time of quaint tales of Robin Hood and other rebels has passed: No "rebel band" is going to stop it, no revolution is going to succeed, because the stranglehold granted by modern weapons is so pervasive we can’t fight it without dying. So instead of relying on comicbook fantasies of "fighting the Power", we should make sure we never get to the point of no return. In this movie’s case, the fatal error was trusting in technology to run itself, without understanding it or taking precautions to install safeguards of overriding its commands and shutting it down if necessary.

In our country, if our government suddenly decided to become a dictatorship, there would be no revolution or rebellion. Our little handguns and rifles aren’t going to match cluster bombs, missiles and chemical weapons. We’re at the mercy of our leaders, and the chance for rebellion by force in countries around the world (such as Zimbabwe) has past.

The cautionary tale that Collosus tells is very old, and considered dated and clichéd by many. And because of that, its lesson is lost on those too "clever" to learn from it. Let’s hope these people too clever to learn from dated clichés don’t come into positions governing things like Collosus.