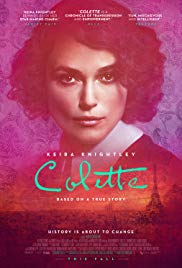 Storyline:
After marrying successful Parisian writer Henry Gauthier-Villars, known commonly as “Willy” (Dominic West), Gabrielle Colette (Keira Knightley) is transplanted from her childhood home in rural France to the intellectual and artistic splendor of Paris. Soon after, Willy convinces Colette to ghostwrite for him. Colette, in turn, pens a semi-autobiographical novel about a witty and brazen country girl named Claudine, sparking a bestseller and a cultural sensation. After it’s success, Colette and Willy become the talk of Paris and their adventures inspire additional Claudine novels. Colette’s fight over creative ownership and gender roles drives her to overcome societal constraints, revolutionizing literature, fashion and sexual expression.
Written by
jesusblack-30225
User Reviews: Colette is yet another tale of female empowerment: a woman with real talent trying to break out of the gilded cage she finds herself trapped in.

This is a true story, set in Paris in the late 19th Century. Colette (Keira Knightley), a beautiful country girl living in Burgundy is seduced by and then married to the much older Parisian ‘literary entrepreneur’ Willy (Dominic West). Willy is a "brand" in Paris: a well-known critic turned author. The only problem being that he does virtually no writing of his own but ghosts work out to his team. Colette exhibits a gift for writing slightly lascivious tales of her life (under the pseudonym Claudine) at her girl’s school, where clearly nighttime swimming lessons taught more than back stroke! As a result, Willy fills a financial hole by publishing Colette’s work in his name. The books fly off the shelves faster than the publishers can print them. But Willy has expensive habits and Colette gets locked into writing an ever-popular series but without a voice of her own.

If the "swinging 60’s" started anywhere, it was probably in Paris during this time period! While Victorian England was staid and conservative, Paris – home of the Moulin Rouge – was a hot-bed of liberation. As a result, Colette and Willy’s marital affairs are – erm – sexually ‘fluid’. While Colette has to learn to live with her philandering ‘Free Willy’, he positively encourages the bi-sexual Colette to explore the other camp, as it were.

Keira Knightley turns in a truly cracking performance in the titular lead. No-one does ‘brooding’ better than Knightley, and she gets ample chance here to exercise that look, most notably in a train scene near the end of the film: if looks could kill.

Dominic West delivers as reliably a solid performance as you would expect from him, but he is such a despicable and loathsome character that it is difficult to warm to him.

Driving me mad (not sexually you understand…. although…) was the girl playing the American double-dip love interest Georgie: I knew her so well but just couldn’t place her. It was the American accent that threw me: she is of course Eleanor Tomlinson, Demelza from TV’s "Poldark", here showing a lot more flesh than she can get away with on a Sunday night on BBC1!

The film is obviously in English about one of France’s literary greats (although curiously Colette writes in French). My guess is that the film will go down like a lead balloon in France as a result. A part of me would have liked this to be French language with subtitles, but maybe that’s just me.

When you look at it objectively, Colette’s story is quite remarkable: what a clever and determined woman.

Aside from Knightley, the other star turn in the film comes from cinematographer Giles Nuttgens (who also did "Hell or High Water"). The scenes, particularly the bucolic ones set in the French countryside, are simply gorgeously photographed. The framing of the shots is also exquisite with an impressive shot of the slog up a spiral staircase to the couple’s flat being repeatedly used.

It remains curious to me how prudish both the UK and the US are still about sex on screen. In the UK the film is a 15 certificate; in the US the film is R-rated! Yes, there are some breasts on show, and a few mixed- and same-sex couplings (particularly during a frenetic 5 minute period in the middle of the film!), but they are artfully done and you don’t get to see much more than the breasts. In comparison, the violence that would get meted out during a 15/R action thriller would typically makes my eyes water.

This is one of those films that is worthy, beautifully done, well acted but for some reason it felt to me like a bit of a slog. At 111 minutes it certainly felt a lot longer than it was. The middle reel of the film in particular is rather pedestrian (and yes, I recognise the irony of the fact that I just said there was the frenetic 5 minutes of sex during that part!). Maybe on the night I was just not in the mood for this type of film.

The director is Englishman Wash Westmoreland, whose last film back in 2014 was the impressive "Still Alice".

I’m glad I’ve seen it, and it is a lot better than many films I saw last year. But in terms of my "re-watchability" quotient, its not going to rate that highly.

(For the full graphical review, please check out One Mann’s Movies on the web or Facebook. Thanks).