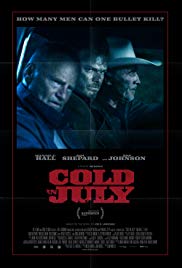 Storyline:
When a protective father meets a murderous ex-con, both need to deviate from the path they are on as they soon find themselves entangled in a downwards spiral of lies and violence while having to confront their own inner psyche.
User Reviews: Cold in July is a Texas neo-noir set in 1989. A man called Richard Dane kills an intruder in his home one night. The victim’s dad subsequently turns up and starts hassling Dane and his family. The police get involved but things begin to take a turn for the unpredictable when it soon becomes apparent that the dead man isn’t who he appears to be. This leads to a spiral of very dark secrets.

What makes this one work so well is a combination of a great trio of performances and the 80’s retro styling. Of the former we have Michael C. Hall, Sam Shepard and Don Johnson as a motley crew of sleuths bent on discovering the truth and ultimately meting out violent retribution. The three actors work well together in portraying their uneasy alliance. While the aforementioned 80’s setting is great too. The soundtrack is a combination of some choice 80’s hard rock and some neo-electro 80’s styling synth music to score the film and build atmosphere. It works highly in the movie’s favour and gives it a cool sheen while seeming entirely appropriate given the era depicted.

The story-line is a mixture of fairly familiar things you probably have encountered in these types of movies before and I’m not going to reveal too much of what lies ahead as it’s best to go into these types of films with as little foreknowledge as possible. But it is the way that these standard elements have been presented on screen that makes them work so well, as well as the aforementioned acting and 80’s setting. There are a few loose ends in the story and some aspects that you will require to suspend your disbelief at a little. But this is hardly a new thing when it comes to pulpy thrillers. The important thing is that Cold in July is a superior example of this kind of thing. It’s very involving throughout and makes its generic material seem fresh, which is easier said than done.

Storyline:The film tells the story of the Podolsk cadets' heroic stand outside Moscow in October 1941. Cadets from the Podolsk infantry and artillery schools were sent to the Ilyinsky line of defense, fighting alongsi...