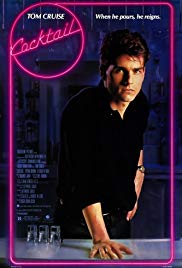 Storyline:
With dreams of becoming a successful businessman and even a millionaire, the ex-military man, Brian Flanagan, waits for his big break while serving drinks at a New York City tavern and studying for his degree. However, when the charismatic cynic and veteran bartender, Doug Coughlin, becomes the ambitious Brian’s sage mentor, their chemistry combined with the flamboyant tricks behind the bar will soon yield fame and money until they decide to split ways. Eventually, as Flanagan struggles to raise money in Jamaica to open his own bar someday, he will fall hard for the striving waitress Jordan Mooney, while a wealthy fashion executive wants to take him back to Manhattan to live with her. Is there a future between Brian and Jordan?
Written by
Nick Riganas
User Reviews: God only knows in my lifetime I’ve dealt with a lot of bartenders, I still do now when I go in a place and only order non-alcoholic beverage. But unless it was a topless joint where the bartenders were required to do more than pour and converse and maybe toss out an occasional drunk, I never did see one do the Hippy Hippy Shake. And here Tom Cruise does it tandem with Bryan Brown.

Still Cocktail is an entertaining enough film with Tom Cruise now settled into the parts he usually plays as an all American social climber. Tom’s fresh out of the army and his first stop is his uncle Ron Dean’s bar in Queens. He probably could get a job with his uncle, but Tom aims for higher things.

The problem Tom has in looking for a job is that old adage, what kind of work are you out of? He tries in all kinds of places, but he has no experience. An exhausted Tom arrives at an upscale bar presided over by Bryan Brown and the two of them hit it off. Brown teaches Tom all the tricks of the trade in bartending and hustling.

Bartending on the Upper East Side is a whole different world than the working class of Queens. In fact right around the same time Cocktail was out the tragic murder of Jennifer Levin by preppie killer Robert Chambers was introducing via the tabloids of the world of the yuppie bars of that vicinity. It was the world of Cocktail brought to a gruesome reality.

The women come and go for both Cruise and Brown. Success turns out to be ephemeral. The key scene in the film for me is that where Brown after marrying East Side princess Kelly Lynch and her father’s money has backed him in opening the most posh establishment on the East Side, he confesses that he doesn’t know the first thing about really running a business. Running a bar/restaurant is a lot more than pouring drinks and dispensing wisdom. Turns out Brown hasn’t got that much wisdom and his realization of that leads to tragedy. It’s a beautifully played scene, the best I’ve ever seen from Bryan Brown.

Elizabeth Shue as Tom’s East Side princess is very appealing, but I also like Ron Dean as Cruise’s uncle who really does have a lot of wisdom and he doesn’t think that he has it simply because he pours drinks.

Brian Flannagan in Cocktail became one of Tom Cruise’s staple roles and further endeared him as our number one superstar. Still I’ve yet to see a real bartender do the Hippy Hippy Shake.