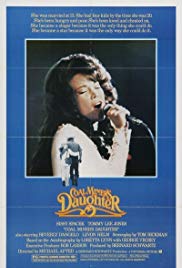 Storyline:
At only thirteen years of age, Loretta Webb marries Doolittle Lynn and is soon responsible for a sizeable family. Loretta appears destined to a life of homemaking, but Doolittle recognises his wife’s musical talent, and buys her a guitar as an anniversary present one year. At eighteen, the mother of four children and busy housewife still finds time to write and sing songs at small fairs and local honky-tonks. This gift sets Loretta Lynn on the gruelling, tumultuous path to superstardom and country music greatness.
Written by
Shannon Patrick Sullivan <[email protected]>
User Reviews: To me, the success of a film biography isn’t whether fans of the personality will watch the movie; they will, whether it is any good, or not…the true measure of success is how the film captures an audience who DON’T know the person, and wins their hearts.

"Coal Miner’s Daughter" does this, better than nearly any other ‘biopic’, and the film is as passionate and wonderful today as it was in 1980.

There are several reasons for the film’s ‘staying’ power; first, British director Michael Apted, making his first American feature, brought an unbiased eye to the lifestyle of poor but proud rural America. Eschewing the clichés of the "Smokey and the Bandit" and "Dukes of Hazzards" stereotypes, he cast many ‘locals’ in the film, and attempted to recreate, as realistically as possible, the world Loretta Webb/Lynn knew so well.

Second, the film boasts not one or two, but three powerhouse supporting performances. Tommy Lee Jones, who Apted picked over Harrison Ford, is a revelation as Doolittle ‘Mooney’ Lynn. With only a handful of credits when the film was released, he demonstrated the dazzling combination of humor and sensitivity that would eventually win him a place as one of our finest actors. Levon Helm, making his dramatic debut as Loretta’s father, Ted, is even more impressive. Low-key, but irresistible, he offers so much love and power in his portrayal that it’s easy to see why he would remain influential to his superstar daughter, long after his passing. In a brief but sparkling portrayal, Beverly D’Angelo channels Patsy Cline to perfection (I may be alone in my opinion, but I prefer her portrayal over Jessica Lange’s, in "Sweet Dreams"). With earthy charm and worldliness, she would change Loretta’s image from ‘cowgirl’ to ‘royalty’, and her shocking, early death would shatter Loretta, much as it did for everyone who loved her.

Of course, without a strong, charismatic performance in the lead, nothing else would matter, and Sissy Spacek is nothing less than spectacular! Handpicked by Loretta Lynn, herself, from a photograph (Spacek would admit that she felt ‘wrong’ for the role, and uncomfortable about Lynn proclaiming the actress as "her" choice on national TV, but as she was preparing to turn it down, "Coal Miner’s Daughter" came on a ‘classical’ radio station she was listening to, and she suddenly knew she was ‘meant’ to play the part!) Contrary to popular opinion, she had to learn Lynn’s Southern accent, and spent grueling weeks learning how to sing her signature tunes (including a week with Loretta, herself). The end results are stunning! Despite only a passing resemblance, Spacek so totally captured the talent, vulnerability, feistiness, and strength of Loretta Lynn that she won the 1980 ‘Best Actress’ Oscar (over Gena Rowlands, Ellen Burstyn, Goldie Hawn, and Mary Tyler Moore), and is still identified with the role, today.

I knew little of Country Music in 1980, and even less about Loretta Lynn, but the film captured my heart…and after 25 years, it still moves me! "Coal Miner’s Daughter" IS a CLASSIC!