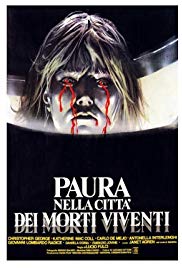 Storyline:
In the small New England town of Dunwich, a priest commits suicide by hanging himself in the church cemetery which somehow opens the gates of hell allowing the dead to rise. Peter, a New York City reporter, teams up with a young psychic, named Mary, to travel to the town where they team up with another couple, psychiatrist Jerry and patient Sandra, to find a way to close the gates before All Saints Day or the dead all over the world will rise up and kill the living.
Written by
matt-282
User Reviews: This film is probably an accidental masterpiece, but a masterpiece nonetheless. Fulci is one of my idols, but I don’t think he was a really good filmaker. It was his lack of coherency and almost childlike need to gross you out that made his best films so beloved. Gates of hell is the best of the lot. The film is basically one long wierd, surreal treatise one death and the horror of violent death in particular. Listen to the layered, terrifying soundtrack – wind howls, babies scream, stones grind, skulls break… The much talked about gore is not just gore but completely outlandish, brilliantly excecuted (no pun intended) operatic set pieces that come out of nowhwere and are truly, deeply repulsive. The prog rock score is just as yummy. The non linnear plot creates one of the best pieces of horror/surrealism I’ve ever seen. The ending is blood chilling because it doesn’t make sense. See this movie more than once and realize it’s so called faults are part of the reason it’s so goddamned great!

Storyline:A loving film tribute to Russian filmmaker Larisa Shepitko, who died tragically in a car accident in 1979 at the age of 40. This documentary by her husband, Elem Klimov, includes excerpts from all of Shepitk...

Storyline:Frank Ripploh is a bit of a rascal: he's a bearded and shaggy-haired teacher, and he's gay with a very active sex life and an interest in making films. He keeps his personal life and teaching separate, but h...

Storyline:Baron Luigi Fontana is a rich and stinging producer of fine wines, as well as president of the amateur football team of Cerignola who, to crown a triumphant championship, is about to be promoted to Serie C.U...

Storyline:User Reviews: More old-fashioned than this pot-boiler is hard to find. What you get is the standard legion flick, complete with murder, wrong man-joining- Foreign-Legion, Femme Fatale, sadistic sergeant, the...

Storyline:A documentary-fiction that reconstructs the complex procedural path followed by the 1969 massacre through the point of view of Francesca Dendena, daughter of one of the victims and President of the Family As...