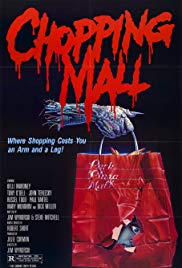 Storyline:
A group of teenagers that work at the mall all get together for a late night party in one of the stores. When the mall goes on lockdown before they can get out, the robot security system malfunctions and goes on a killing spree. One by one, the three bots try to rid the mall of the “intruders.” The only weapons the kids can use are the supplies in other stores. Or . . . if they can make it ’til morning when the mall reopens.
Written by
Lindsey Wilhite ([email protected]) with punctuation corrections by Brx
User Reviews: In this insignificant but nevertheless fun 80’s low-budgeter, the sex-hungry teenagers for once aren’t chased around by a killer wearing a ridiculous mask but by a troop of malfunctioning and heavily armed security robots! Four couples that work in various stores at the Park Plaza shopping mall secretly throw an after hours party during the same night when a lightening storm completely disorientates the 3 brand new "Protector" robots and get killed off one by one. "Chopping Mall" (how can you not love that title?) is a lot of fun to watch and it’s easily Jim Wynorski’s best effort out of more than 60 directed films. Despite the fact that "Chopping Mall" doesn’t take itself too seriously and mainly focuses on satire, there really are some tense moments and properly mounted suspense sequences. The laser head-explosion sequence is famous and there are multiple other cheese-highlights. But what is perhaps the most surprising, are the engaging acting performances and the welcome amount of tasteful nudity. The most familiar cute face in the cast is Barbara Crampton who stars as a screaming beauty in between her two greatest films "Re-Animator" and "From Beyond". Truly ingenious are the endless references towards Roger Corman’s repertoire, especially illustrated through cameos of Paul Bartel, Dick Miller and Mary Woronov. Unquestionably, "Chopping Mall" is a righteous guilty pleasure of many, many horror fans.