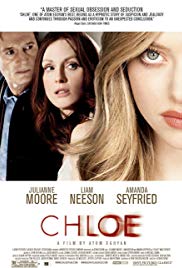 Storyline:
Catherine and David, she a doctor, he a professor, are at first glance the perfect couple. Happily married with a talented teenage son, they appear to have the perfect life. But when David misses a flight and his surprise birthday party, Catherine’s long simmering suspicions rise to the surface. Suspecting infidelity, she decides to hire an escort to seduce her husband and test his loyalty. Catherine finds herself ‘directing’ Chloe’s encounters with David, and Chloe’s end of the bargain is to report back, the descriptions becoming increasingly graphic as the meetings multiply.
User Reviews: Thrilling erotic adventure with some of the best acting we’ve seen out of Amanda Seyfreid to date! The direction lulls you in to a wild ride as more of the plot is revealed. MUST SEE. It was so enjoyable to see Toronto finally shot AS TORONTO. It is also noteworthy that Liam Neeson courageously filmed a portion of this movie after the tragic death of his wife. With wild twists and turns. I saw this at the Toronto film festival and couldn’t have been more pleasantly surprised by the result. Also, keep an eye out for the up and coming actor Max Theriot. He’s going to be someone to look out for. Julianne Moore also rings in a great acting performance with her great control of a woman who’s life begins to spiral out of control.