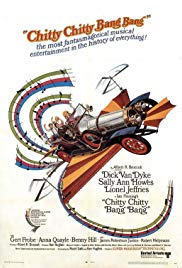 Storyline:
An eccentric professor invents wacky machinery but can’t seem to make ends meet. When he invents a revolutionary car, a foreign government becomes interested in it and resorts to skulduggery to get their hands on it.
Written by
Murray Chapman <[email protected]>
User Reviews: This exciting children musical displays derring-do adventure, romance , thrills and spectacular frames with phenomenal production design . Imagination and fantasy with primitive but effective special effects galore including a mesmerizing photography with wonderful , marvelous landscapes . The flick gets lots of bombastic effects including flying machines , globes , romantic castles and numerous images have you on the edge of your seat . This is the most Fantasmagorical musical entertainment in the history of everything . In the early 20th century England, a weird inventor named Caractacus Potts (Dick Van Dyke who steals the show as likable dancer and splendid player) works in his rare artifacts , he lives along with his equally rare father (Lionel Jeffries) , and his two little boys named Jeremy (Adrian) and Jemima (Heather). When the kiddies beg their daddy to buy for them thhe wished plaything , a broken car sitting at a local junkyard , a garage whose owner is George Coggings (Desmond Llewelyn) . Then eccentric Caractacus does whatever he can to make some money to buy it. One plan to raise money involves the unexpected help of a beautiful girl they have just met named Truly Scrumptious (a pretty young woman well performed by Sally Anne Howes), the daughter of a candy factory wealthy owner (James Robertson Justice) . Using his magic skills, inventive Caractacus turns the piece of junk into a marvelous working machine , an amazing flying car that also navigates which they name Chitty Chitty Bang Bang because of the noise the engine sounds . At a seaside picnic with his children and Truly , Caractacus and Co. spins a fanciful tale of an eccentric inventor, his gorgeous new friend , his two children, and his favorite car named Chitty all in the faraway country of Vulgaria. The nasty Baron Bomburst, the king of Vulgaria, will do whatever he can to get his hands on the magical car. Then the villain Baron Bomburst (Gert Frobe) married to Baroness Bomburst (Anna Quayle) robs the car of ours friends . The baron has made kiddies illegal, being pursued by the sinister child catcher (Robert Helpmann) including the unsuspecting children of a stranger inventor of a fabulous car . Later on ,Caractacus helped by a toymaker (Benny Hill) have to attempt and save the kiddies of Vulgaria.

This children motion picture mingles musical numbers , flat jokes , noisy action , flying car pursuits , humor with tongue-in-cheek, rip roaring and lots of amusement . This is an entertaining film loosely based on book by Ian Fleming and well adapted by Roal Dahl , it packs fantasy , musical numbers which both pastiche and subvert adventure and speculative fiction of the period ¨Belle Epoque . The picture incorporates contemporary action film as well as much use of adventure to portray its fanciful elements , furthermore visual effects within the form of the older-style films they have largely superseded . Riveting for its casting , but overall , roller-coaster spectacle . Most of the charm and wit remains from original story in this particular version . It results to be an amusing of somewhat aloof , storytelling of children classic with a magnificent star cast at its best . Stimulating adventures of ours protagonists are complemented by a breathtaking final attraction in the castle scenes . The film is a Dick Van Dyke recital , he sings , dances, stooges, makes acrobatics, tongue twister and pulls faces and grimaces . It’s a farce with the master comic pretty amusing and with several choreography and musical numbers . Ideal main cast is completed by phenomenal secondary actors as Lionel Jeffries , James Robertson Justice , Benny Hill and Desmond Llewelin , among others. Atmospheric , lively score by Irwin Kostal , fitting splendidly to adventure and musical numbers , including the classic leitmotif . Colorful and glamorous cinematography by Christopher Challis in Super Panavision 7o with the fantastic château scenes filmed in Neuschwanstein Castle, Hohenschwangau, Schwangau, Bavaria, Germany . The picture is lavishly produced by Albert R Broccoli ,James Bond’s producer, and brilliantly directed by Ken Hughes . He’s a good writer, producer and director, who achieved big time when made ¨Cromwell¨, ¨Trials of Oscar Wilde¨ , ¨Casino Royale¨ and of course with ¨Chitty , Chitty Bang Bang¨.

This is a highly amusing and frequently funny action-adventure romp with a witty script specifically aimed at a kiddies’ audience , though excessive songs leave adult spectators a bit seasick . Picture is a vehicle Van Dyke , he’s an authentic comic and real Farceur. If you like Dyke’s crazy interpretation , you will most definitely enjoy this one . Well worth watching for passable special effects and an enjoyable performances from main cast as the children will like it.