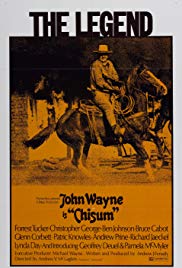 Storyline:
As one of the founders of the town of Lincoln, John Chisum is increasingly worried as Lawrence Murphy moves in on the local stores, bank and land by questionable means. Chisum and fellow honest ranch owner Henry Tunstall try and use the law, but Murphy owns that too. Confrontation threatens and Tunstall’s man Billy Bonney is not slow to get involved.
Written by
Jeremy Perkins {J-26}
User Reviews: Although a few notches below classic Wayne westerns like "Stagecoach" and "Rio Bravo," this film was a masterful return to form for Wayne. This was the first film Wayne did after gaining weight and donning an eye-patch for his work on "True Grit." In this film, Wayne plays an honest, straight talking man of action, not too different from the type character on which he built his career. The supporting characters are very well drawn and the villains resourceful enough to keep the action moving. In a way, this character, though based on an actual rancher, is similar to the character of Dunson in the superior "Red River." Both characters gambled on a long cattle drive from Texas and although "Red River" is about the drive itself, "Chisum" is about what happens to a similar character twenty years after the drive succeeds. At the time the film was released, at least one critic commented on how improbable it was for John Wayne, at the climax of the movie, to have done that much riding, fighting and falling all within the same sequence. As far as I am concerned, that sequence helped prepare me for later action sequences of 1980’s action stars like Bruce Willis and Arnold Schwarzenegger and action directors like James Cameron and John Woo. The film is no "Red River" but it is fine western nonetheless.