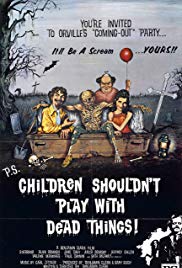 Storyline:
An acting troupe led by Alan Ormsby go to a graveyard on a remote island to perform a necromantic ritual. The ritual works too well and soon the dead are walking about and chowing down on human flesh. The dwindling group of survivors struggle to escape.
Written by
Humberto Amador
User Reviews: I first encountered this movie as a kid. The ad in the paper with Alan, a corpse and the guy with the beanie…it was speaking to me in ways that I wouldn’t understand for years–black humor! I first saw it on t.v. as a teen, long before I’d seen "Night Of The Living Dead," and it spoke to me again. It was scary…but it was funny and sort of "wicked" too. It went places I knew instinctively most movies did not, and I loved it for that, as well as the fact that I knew others would NOT like it.

The story is nothing remarkable–a bunch of hippy actors invade an island, raise the flesh-eating dead, and die horribly. What is memorable about this movie is the "execution." The characters are all wonderfully obnoxious actors. They spit campy, bitchy, memorable dialog and are all generally hateful and selfish, as all actors I’ve known tend to be. It comes off as phony, but most actors I know really talk and behave like the characters in this movie, as though they are "in a movie." The actors did a great job. You have a sense all the characters are going to die in great pain, especially the beautifully hateful, snivelling director of the theater company with the stripey bell-bottoms, and the anticipation of this is wonderful. When the zombies finally enact their revenge it’s extremely satisfying.

The effects are cheap, but then, I’ve never had a problem with cheap zombie effects. It’s the idea of a zombie that is so frightening, not the make-up necessarily. They are irrational and unrelenting, even if it’s a rubber mask they’re wearing. But the zombies in this movie are, for all that, fairly effective. They come late, but by then you’ve been nudged into believing the whole movie is just a lark, so they’re all the more effective. When they hit, they hit as hard as "NOTLD." The music score is eerie and effective, as well as the locale. You can almost feel the fog creeping up on you.

Where this one really distinguishes itself, however, is the "weirdo" factor. It flirts with gay stereotypes and necrophilia, Satan worship, Jewish humor and seriously bad 70’s hair and clothing. It’s a lot smarter than it appears, or most would think, and smart isn’t what most people want (or get) with their cheap exploitation horror. It’s surprisingly grisly for a PG and far too tame for an R. It’s too funny for horror and too creepy for comedy. In other words, it’s perfect! I’m sorry to hear they intend to remake it, but hopefully with it’s original creator at the helm it’ll be watchable at least. Bob Clark is an oddity, to be sure–he went from this to another wonderful cheap-o zombie film ("Dead Of Night," aka about 40,000 other titles) and "Black Christmas," to…"A Christmas Story"?? "Porky’s"?? "Baby Geniuses 2?" Hmm. Well, it almost makes me respect him more for defying description.

Here’s a tip of that hat to a great, original film from one of it’s many "children…"