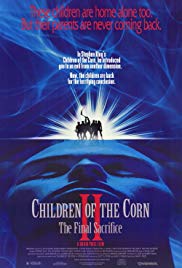 Children of the Corn II: The Final Sacrifice (1992)

Storyline:
Belated sequel to the ’84 film. 8 years after the first, authorities discover the mutilated bodies of adults in the secluded town of Gatlin, Nebraska and children hiding in the corn. Enter John Garrett (Terence Knox) and son Danny (Paul Scherrer) who head for Gatlin on a story and get caught up in this mess when an orphan named Micah (Ryan Bollman) is possessed by He Who Walks Behind The Rows.
Written by
Eric Creed
User Reviews: Apparently it’s not a good idea to sit in the nosebleed section of a church; black contact lenses lend evil powers to anyone who wears them; you should never climb under your house in search of your kitty, especially if evil-looking children are lurking about. These are just some of a few lessons to be taken from the sequel nobody expected that snowballed into the franchise nobody wanted, "Children of the Corn II: The Final Sacrifice."

Picking up after the events of the first film, a tabloid-journalist and his teenage son are passing through a small neighboring town of Gatlin, Nebraska shortly after those corn-husking little munchkins laid it to waste. Looking for his big break, the father/journalist decides to stay in town for a while. After merely a few days in town, he receives his fair-share of white-man’s guilt from the resident Native America, uncovers a moldy corn conspiracy (a plot point which goes virtually nowhere) and plows the field of a innkeeper. Meanwhile, his son attempts to sow some seeds of his own with the girl-next-door who appears to the only one under the age of 18 in town who isn’t under the trance of the mysterious maze.

It must be said that by no means is "Children of the Corn II" a particularly great film. Like the first, it’s pretty basic and predictable. It seems as if the script for the first film was tweaked just slightly to concoct a sequel and it shows with plot-holes the size of Nebraska (see what I did there?). Director David Price — whose resume is as equally unimpressive as the film’s script — loves to inject a lot of ridiculous gore into the film, but forsakes logic in doing so. You’ll see corn husks slashing throats, a nosebleed that somehow turns into an earache and a house falling on a woman who doesn’t seem to understand she can either try crawling out or hide in between the beams. Nevermind that, though. You don’t come here for logic, and Price knows that. With his made-for-TV movie cinematography, you can be rest assured you’ll know exactly what you’re getting into within the first five minutes of the film.

But what about the cast? Kudos must go out to Ryan Bollman who does his best to look as menacing as possible as the leader of the kiddy cult. Someone ground that kid! On the other side of the coin, you have Terence Knox, resembling what would happen if Bill Pullman and Alec Baldwin gave birth to a bloated baby. Knox seems to be apathetic about the whole thing, as best evidenced by his reaction to the death of a friend by the end of the film. He steps it up a notch when he is caught sinning rather vigorously by his son, but this scene is so uninteresting, you’ll feel the same sort of apathy toward it as the actor does the film. I guess you just can’t expect Academy Award material with these films, but would it hurt to have actors who care about more than cashing in their paychecks carrying a film?

When all is said and done, in spite of its glaring flaws, "Children of the Corn II: The Final Sacrifice" is easily the best sequel in the "Children of the Corn" series, but that’s not saying much. When you consider the films that followed in its wake, it’s almost a back-handed compliment. Then again, the first "Children of the Corn" wasn’t ground-breaking cinema by any stretch of the imagination, so the fact that any sequel to it can deliver the most basic entertainment is a miracle in and of itself. To that end, "The Final Sacrifice" is a rather schlocky but suitable guilty-pleasure follow-up. If you’ve suffered through enough "Amityvilles" or "Howlings" then there is no reason you can’t sit through this one as well.