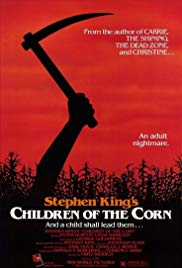 Storyline:
A boy preacher named Isaac goes to a town in Nebraska called Gatlin and gets all the children to murder every adult in town. A young couple have a murder to report and they go to the nearest town (Gatlin) to seek help but the town seems deserted. They are soon trapped in Gatlin with little chance of getting out alive.
Written by
Éamonn Green
User Reviews: I saw this film sitting on my Dad’s lap when I was about seven years old. (I was a horror film fanatic from a very early age on.) We used to sit up watching late night scary movies while my Mom went to her ceramics classes.

Dad and I loved this movie. There is no sex or nudity in this film. Even though the images are pretty graphic, if your older children are mature enough to handle a little fright, this should be okay for them. Besides, since the children are the "bad guys", your kids should be pretty happy!!

My favorite actors in the film are the two star children (Joby and Sarah). They really make the film eerie with their innocence and sadness over losing their families. Malachi would be the scariest character. Even the way the other children in the movie gasp when they hear his name makes me shudder. I would not want to face him either!! Another aspect that makes this film so scary is the music. The director adds clips at just the right moments but doesn’t forget to leave ample silence. There is nothing greater to add to the suspense than a good dose of silent screen. Then all your senses get a jolt at once when the big horror scene comes alive.

The most suspenseful scene is when the boy stumbles out onto the highway clutching his sliced throat. It’s a real hair raiser!! But, without revealing too much, I guess I will close by saying that this is by far one of the best horror films I have ever seen. A little strange, but, then again, this IS a Stephen King film. Need I say more??