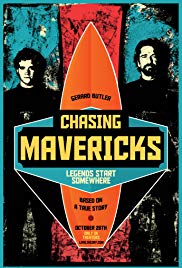 Storyline:
The inspirational true story of real life surfing phenomenon Jay Moriarity. When 15 year old Jay discovers that the mythic Mavericks surf break, one of the biggest waves on Earth, is not only real, but exists just miles from his Santa Cruz home, he enlists the help of local legend Frosty Hesson to train him to survive it. As Jay and Frosty embark on their quest to accomplish the impossible, they form a unique friendship that transforms both their lives, and their quest to tame Mavericks becomes about far more than surfing.
Written by
Twentieth Century Fox
User Reviews: I went and saw this after reading many unfavorable reviews, and now having seen it I can’t figure out all the negative attention. Granted, I may be a little biased having grown up surfing in Northern CA, paddling out at many of those spots, and looking up to the big wave chargers such as Jay, but based on entertainment value alone I thought it was great. The acting was solid, footage was incredible, and story never dragged on or lost my attention. The film portrayed a reasonably realistic vibe of Santa Cruz as a high school kid and the often not discussed elements of surfing. I thought it was great that they were able to bring in the real pioneers of Mavs and local shapers.

The only down-check was that it did feel slightly ‘karate-kidish’ at times and there were a few events that would be incredibly rare that all seemed to happen at opportune moments.

Perhaps this movie won’t appeal as much to many who don’t have a passion for the sport or appreciate the massive undertaking of paddling out in heavy surf – but I found it very entertaining. The story may not have been 100% accurate, but the point is to pay respect to and tell the story of an extremely driven and all around good guy.