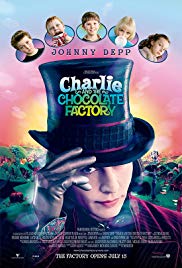 Charlie and the Chocolate Factory (2005)

Storyline:
When Willy Wonka decides to let five children into his chocolate factory, he decides to release five golden tickets in five separate chocolate bars, causing complete mayhem. The tickets start to be found, with the fifth going to a very special boy, called Charlie Bucket. With his Grandpa, Charlie joins the rest of the children to experience the most amazing factory ever. But not everything goes to plan within the factory.
Written by
FilmFanUK
User Reviews: I should hate this, being such a fan of the original, but to be honest I really like it. The story has been realised in a lot more of an appropriate way for the modern world. Tim Burton has yet again done a tremendous job of bringing this fantasy world to life. It’s eccentric, wonderfully mad, funny and just lovable. It does a better job of bringing the original material to the screen than the original, the only problem I have is with Johnny Depp. I don’t have I problem with his acting, I think it’s great, I just feel he’s been directed to play the role too weirdly. The "tragic madness" of his character doesn’t sit too well with me, and I don’t think all of the back-story was necessary. Aside from that it is a great film that does stand up to the original.