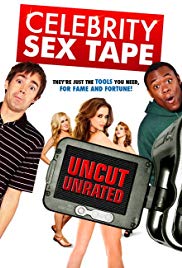 Storyline:
When a group of nerds leak a washed-up celebrity’s sex tape, the publicity revives the actress’s career and other Hollywood rejects want to star in the guys next “production.”
User Reviews: Right, "Celebrity Sex Tape" is definitely not meant for an audience that I am part of. This is one of the most boring and ridiculous movies I have had to suffer through. Well, that might be a bit of an exaggeration, as I gave up half way through the movie. I gave up out of sheer boredom and because the movie was nothing more than an outlet to show off nudity and stupid sex scenes.

I am sure that if you are about 18 years old and just coming of age, then you might think this is a great movie, for for anyone just a tad more grown up and mature, this is nothing more than a waste of film reel.

The story is about a group of young people who make a sex video of some semi-famous celebrity. It gets uploaded to the internet and becomes and overnight sensation. The manager of the celebrity shows up and blackmails the young guys for $500.000 which is due in 30 days. What do they do in order to raise the money? Find washed-up has-been celebrities and promise to revitalize their careers if they have sex on video.

Well, I wasn’t amused one bit by this storyline, and to be honest I found it super boring and immature.

I will say that for the acting, then the people they had cast for the roles were doing good enough jobs. But the Asian stereotyping was just offensive to everyone, even non-Asians.

I just simply gave up just before halfway through the movie. And if you are a fan of proper cinema, then avoid this movie at all costs. It is perhaps your kind of movie if you are in high school or college, or if you just think these no-brainer movies qualifies as entertainment.