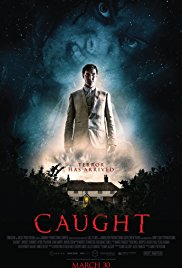 Storyline:
The film tells the story of a journalist couple who invite a man and woman into their idyllic village home, but what begins with an informal interview descends into a nightmarish fight for survival.
User Reviews: Two creepy strangers show up for tea: that is a premise, and depending on what you do with it, not a particularly bad one. However it is not a story. Occasionally having something creepier inexplicably happen is adding incident; it is still not a story. This film, sadly, has a premise and enough incident to make for a mysterious half hour but then it would be nice if it went somewhere from there. And it doesn’t. A lot is hinted at but nothing elaborated on or explained. The actors are all rather good but they are only given fifteen minutes worth of screenplay and forced to stretch and repeat until the film ends. Almost literally. When characters finally learn a little of what has been so confusingly hinted at, it doesn’t change anything for the situation, and the audience is never even let in on it, because to resolve a story and reveal mysteries you would need a story and at least some ideas to begin with. And all they had was a premise. The whole exercise becomes ultimately pointless. It might have been a successful and well-made short film, but as a feature it is a frustrating trial.