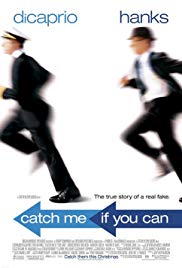 Storyline:
New Rochelle, the 1960s. High schooler Frank Abagnale Jr. idolizes his father, who’s in trouble with the IRS. When his parents separate, Frank runs away to Manhattan with $25 in his checking account, vowing to regain dad’s losses and get his parents back together. Just a few years later, the FBI tracks him down in France; he’s extradited, tried, and jailed for passing more than $4,000,000 in bad checks. Along the way, he’s posed as a Pan Am pilot, a pediatrician, and an attorney. And, from nearly the beginning of this life of crime, he’s been pursued by a dour FBI agent, Carl Hanratty. What starts as cat and mouse becomes something akin to father and son.
Written by
<[email protected]>
User Reviews: On Leonardo DiCaprio’s 31st birthday, I have the pleasure of praising one of the finest actors working today. I didn’t realize what I was seeing when that homeless boy showed up on ‘Growing Pains’–a show not exactly known for the quality of its actors. And I didn’t see much to like about "Titanic" except the excitement of watching the people evacuating and the ship sinking. Also, ‘Romeo and Juliet’ was just corny, with 400-year-old dialogue in a modern setting.

But if he could be nominated for his ‘Aviator’ performance, DiCaprio must be doing something right. And here he shows us what he is capable of. Especially when Frank Jr. is conning people, and most of all when he tries to outwit Hanatty. I am reminded of Harrison Ford and Tommy Lee Jones in "The Fugitive", or perhaps Burt Reynolds and Jackie Gleason in "Smokey and the Bandit". The strange but enjoyable chemistry between these two characters goes a long way toward making this movie work.

Frank Jr. showed a lot of intelligence, and DiCaprio effectively showed us what this man could do. Imagine what he could have accomplished if he had stayed on the right side of the law. But his life on the run was more fun to watch.

Tom Hanks, as popular as he is, can be commended for his willingness to play second banana for a change. And he did a fine job. Martin Sheen and Christopher Walken also made an impact here.

I loved the old cars and the even older songs. The clip from ‘To Tell the Truth’ was a nice touch. The theme song still gives me a craving for vanilla ice cream after nearly 30 years (I didn’t feel I had time to watch the new version).

This was Oscar-caliber. Too bad the Academy Awards people didn’t seem to agree.