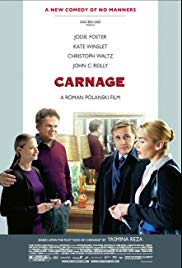 Storyline:
In New York’s Brooklyn Bridge park, eleven year old Zachary strikes his eleven year old classmate Ethan. The boy’s parents learn of the fight and meet to deal with the incident. Although the meeting starts civilized, it quickly degenerates after an unfortunate incident, and soon, their meeting is not only about their boys’ fight, but also the couple’s fitness as parents,
Written by
Huggo
User Reviews: CARNAGE CATCH IT ( A ) Carnage is one of a kind movie about the meeting held between two set of parents regarding their sons fight in the Brooklyn Park. What starts as a meeting between the parents to determine what led to the fight, turns into the most chaotic day of their lives. Carnage is truly splendid, its four characters in one costume in one apartment. The whole movie is like a theater play where it seems that all is said and done in one shot. Roman Polanski got his hands on some of the most talented actors like Jodie Foster, Kate Winslet, Christoph Walts and John C.Reilly. All the actors have done a tremendous job in showcasing Sensible, Polite, Patient, Direct, Tense, Irritated, Defensive, Outraged, Drunk, Insanity, Chaos, Mayhem, Devastation, Violent, Persuasive, Shocking, Appalling, Juvenile, Massacre and Grotesque emotions. I must say that the ending and the whole hamster story in the movie was hilariously excellent. Overall, Carnage is an excellent dark comedy which requires multiple viewing to understand the characteristics and greatness in the performances of the actors.

Storyline:Outspoken and overly critical Nishant Agarwal meets gorgeous new co-worker, Charu, offers his help, assists her financially, and they become close friends. His room-mates, Rajat and Vikrant, are pleased with...

Storyline:The husband of aviation engineer Kyle Pratt has just died in Berlin, and now she is flying back to New York with his coffin and their six-year-old daughter Julia. Three hours into the flight Kyle awakens to ...