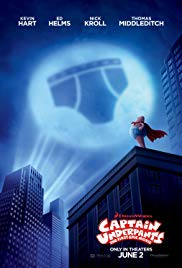 Storyline:
George and Harold are two imaginative pranksters who make the depressing Jerome Horwitz School a better place. They hypnotize their nemesis, the mean-spirited principal Mr. Krupp. He transforms into the incredibly clueless yet kind-hearted and enthusiastic superhero named Captain Underpants. Even without the mean principal, they discover that having Captain Underpants comes at a steep price. Meanwhile, Professor Poopypants tries to eliminate laughter with the school snitch Melvin, and George and Harold discover that there may be more to Mr. Krupp than they had originally thought.
Written by
Ken
User Reviews: This review of Captain Underpants: The First Epic Movie is spoiler free

PERHAPS THE MOST unlikely superhero story to grace the screen is Captain Underpants in his aptly named first film Captain Underpants: The First Epic Movie. Based on Dav Pilkey’s children’s book series about a vicious principal who is hypnotised into an idiotic, hyperactive and super-dumb superhero who uses his quick witted quips and glistening tighty whiteys to unlock your inner child.

An unlikely origin story, as we open with two overly imaginative pranksters George and Harold (Kevin Hart and Thomas Middleditch) who spend their free time creating comics in their tree house. Meanwhile at school is the real nightmare – their mean principal (Ed Helms), makes their life seemingly impossible, he tries to separate them to annihilate their friendship. Until he’s hypnotized into their creation, however they soon find that this may be their biggest regret, as he causes mayhem pretending he’s a superhero he’s quite hard to control. A particularly funny introduction to the superhero which will indeed tickle your funny bone.

The film succeeds in its inventive storytelling, there are two overly imaginative pranksters who help the story flow with their incredible chemistry, there’s a humourless nerdy child (Jordan Peele) who’s the teacher’s pet, finally there’s an evilly mad science teacher (Nick Kroll) with a plan to take over the world. However there’s more on offer here than the average run-of-the-mill superhero film – which has a villain taking over the world and it’s up to the hero to save the day, no this is different. The film maintains this goofy, innocently naughty nature for nearly its entire running time. And it’s brilliant – for most of the time.

The innocently naughty nature works for a while, there are many fart jokes and a few too many toilet jokes that are sadly hit-and-miss also the evil Einstein look-a-like is sadly more loud than he is funny. Still it looks great there are many moments here that will have you smiling. Captain Underpants maintains the most laughs with his quips and his chanting of "Tralalaaa" is endlessly funny, particularly in a standout hero to alter ego switching montage. It’s as if Pilkey’s eccentric imagination from every page of his books has been transferred onto the screen without any changes. From his way of using hilarious dialogue, through the fourth wall breaking storytelling which keeps it fresh enough to put a smile on your face, but the overly silly idiotic nature of Captain Underpants: The First Epic Movie will leave older audiences scratching their heads. Despite the flaws, this is a funny, fresh and bouncy animation which will keep the smiles coming.

VERDICT: A funny, fresh and frantically inventive animation that succeeds in its whims and its wits, but sadly becomes mediocre from the silly nature.