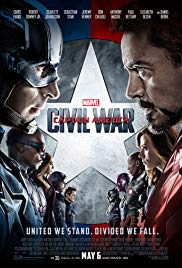 Storyline:
With many people fearing the actions of super heroes, the government decides to push for the Hero Registration Act, a law that limits a hero’s actions. This results in a division in The Avengers. Iron Man stands with this Act, claiming that their actions must be kept in check otherwise cities will continue to be destroyed, but Captain America feels that saving the world is daring enough and that they cannot rely on the government to protect the world. This escalates into an all-out war between Team Iron Man (Iron Man, Black Panther, Vision, Black Widow, War Machine, and Spider-Man) and Team Captain America (Captain America, Bucky Barnes, Falcon, Scarlet Witch, Hawkeye, and Ant Man) while a new villain emerges.
Written by
RespectTheHyphen
User Reviews: Since it is increasingly important in these reviews to appeal to all readers, and not offend anyone, I am offering two reviews. Simply pick the one you like.

1. Great Production Values, Two and a Half Hours of Action, Whats Not to Like?

This, the shorter review, simply states the obvious. Marvel is getting progressively better at delivering action and most people today go to these films for the action, so this is win-win. Yeah. Everyone smile and wait for the next Marvel release. Have your wallets ready.

2. As Marvel increasingly monopolizes the Superhero space, the themes get darker and darker.

The early 1920s believe it or not were a lot like today. Everyone sensed a growing unease in the collective gestalt, so they compensated by more partying, less critical thinking, and going to more movies. Interestingly, movies both before and after the Great Depression offered pure escapist entertainment. You went to the movies to get anything BUT reality.

A century later, that paradigm has shifted. Ever since the "graphic novels" started to tackle serious adult themes, there seems to be a race among superhero writers to see who can put his (her) hero through the most angst, and drag the audience along for the ride.

I am not sure this is a good thing but I seem to be in the minority. I have seen a Spiderman movie where Spidey’s main squeeze was killed because Spidey was a few seconds late. I have seen Superman movies where the main goal seems to be to discover how many buildings you can smash with Superman’s head. And now, picking up on the same thread, I am seeing Avenger movies where governments — these would be the same governments spying on your emails and trying to ban cash — are trying to tell the "enhanced" humans what to do and not do.

Now, the suits at the studio would argue this must be what the audience wants because they are making money. This reviewer would argue that when you have a monopoly on a product line that people want, they will see it regardless. Only one of us is right.

In my view, the best superhero films are the ones that are the most humanistic. Superman comes out of a coma to be with the child he did not know he had. Iron Man rewards a boy who helped him when no one else would. Hulk drops out of an airplane not knowing if he will change or not, but he has to stop the bad guy and protect Betty.

My attitude is, if I want adult themes that badly I don’t need to go the theatre, I can simply try to renew my license or wait in a hospital emergency room. I "get" this is how they are making superhero films these days. I suggest that in a year or two someone will rediscover the older, more sentimental, story lines, the audience will love it, and people of the future will look back at the films of today and wonder, what were they smoking?