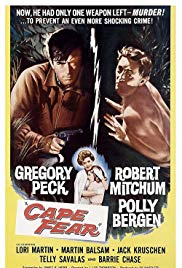 Storyline:
Small-town lawyer Sam Bowden’s life becomes torturous when Max Cady re-enters his life. Cady went to jail for 8 years after Bowden testified that Cady attacked a young woman. Now that Cady has been released, he begins to terrorize Bowden and his family, particularly targeting Bowden’s daughter, Nancy. Initially, Cady uses his newfound knowledge of the law (learned in prison) to annoy the Bowdens, then poisons the family dog… Who’s next ?
Written by
Chris Holland <[email protected]>
User Reviews: One perverse individual can exploit his freedom by using it to encroach on someone else’s. That is the problem with a society which cherishes personal liberty. The community has the dilemma of deciding whose freedom it ought to protect. At what point should the state intervene?

Today, modern democracies have anti-harrassment laws which carry criminal penalties, and there is also the civil remedy of an injunction with power of arrest, but back in the early 1960’s a man who chose to make a nuisance of himself enjoyed wide latitude. It was difficult for the law to step in without infringing his civil and constitutional rights.

Sam Bowden (Gregory Peck) is a small-town attorney in the south-eastern United States. He has a lovely family and a nice home, and is well thought of by neighbours and colleagues alike. This American idyll is destroyed when a newly-released convict shows up, intent on harrassing Bowden. Some years back, the lawyer had appeared as a witness at this man’s trial, and the convict bears an irrational grudge.

Max Cady is one of the cinema’s great villains. Mitchum is irresistible as the heavy-eyed smart alec seething with sexual energy. Cady’s sharp but warped intelligence is disturbing to behold (the way he obtains Bowden’s vacation address is chillingly impressive). He begins to show up wherever Bowden goes, an ominous sarcastic presence to which no objection can be made, so long as he stays within the law. Cady’s salient traits are placed before us right from the start of the film. He is completely callous (ignoring the girl who drops her books on the stairs) and a nasty sexual predator (picking up the waitress in the bowling alley).

"Cape Fear" is a taut, absorbing thriller. Mitchum’s charisma fills the screen, and the dark eerie look (by Director of Photography Sam Leavitt) compounds the feeling of menace. The incidental music is excellent.

However, the film has some implausible ingredients. Why would a woman who has just been sexually degraded, and is clearly traumatised, be handed over by the police to the care of a private eye? (Charlie Sievers the gumshoe is played by Telly Savalas – with hair!) Would a criminal attorney really – no matter what the provocation – hire waterfront thugs to beat up a stalker? How come Sam’s gun is still effective after being immersed in the river? Why doesn’t Nancy’s phone work? It is preposterous to suggest that Cady would waste time on the elaborate feint towards Peggy instead of pursuing his real victim. And how can it be that Cady can defeat three ruffians single-handed, overwhelm a police bodyguard with ease, yet fail to defeat Sam, even when armed with a stick?

Verdict – Allowing for the improbabilities, this is a well-made thriller with a magnificent performance by Mitchum.