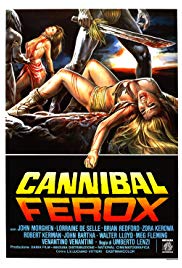 Storyline:
Anthropologists take a trip to the jungles of Colombia to study native cannibals. Instead, they find a band of drug dealers, using the natives to harvest coca leaves. After awhile, the natives are tired of being tortured slaves, and turn on their masters, as well as the anthropologists, thus filling the screen with gruesome splatter!
Written by
Humberto Amador
User Reviews: I saw the grindhouse releasing of this on dvd, completley uncut and I have to say it wasn’t anything special. If you like campy italian horror movies you’ll love it of course, it follows a bunch of two dimesional characters and a whole lotta bad acting in a jungle filled with cannibals. Gore wise it was only unpleasant due to 2 small scenes one when a mongoose is cruelly tied to a stick while a snake tries to kill it and a big turtle is chopped up to be eaten. The rest is just standard believe me but then i doubt grindhouse would sell as many copies if they marketed it that way……

Storyline:Adriano Doria is "the entrepreneur of the year" in Milan.He drives a BMW, wears a flamboyant Rolex, has an adorable wife and daughter and a beautiful mistress. But now he is under house arrest, accused of mu...