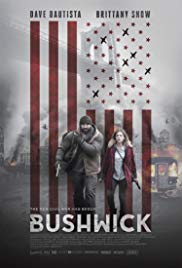 Storyline:
BUSHWICK tells the story of twenty-year- old Lucy (Snow) and war veteran Stupe (Bautista). Texas is trying to secede from the U.S., and NYC is being used as a negotiation tool. Lucy meets Stupe after coming up from the subway into the military invasion of Brooklyn. Together they decide to cross the treacherous five blocks of Bushwick – littered with looters, local militias, the invading forces, and one crazy cousin – in order to get home and be reunited with Lucy’s grandmother.
User Reviews: Two people get stuck in a city-wide gun fight.

The camera trails about six feet behind the main characters as they scamper from one besieged house to another.
The action is pretty intense!
Passers by and pedestrians in the back ground get gunned down or embroiled in their own personal dramas.

This is not an expensive film and its lack of budget is both its strength and weakness.
It has a gritty feel to it and there is no big Hollywood star waiting to rip his shirt off and everything has a degree of realism about it.

But some of the action scenes do suffer from a lack of funds.
Soldiers wait patently for stuntmen to do their thing before spurring into action, or beat at invisible flames that the CGI team didn’t get time to add.

This feels very much like a computer game.
There is not a whole lot for the characters to do except run and dodge and shoot, but the film is kept under the magic 90 minute mark so that was ok.

They try to add some meat to the characters in a couple of quite dull dialogue scenes that didn’t really work.
I only know the characters from their backsides so I only need to know them about as intimately as I know third storm trooper from the right.

The final sequence falls apart a bit as the sets are just too small for the extras to comfortably fight over.

This is a great, cheap little run-and-gun action movie.
Quite gritty and thrilling.

Storyline:Four teenage kids from the tiny mining town of Gold Lick vandalize a nineteenth-century cemetery of Chinese laborers when one of them disturbs a demon who's been guarding the souls of 100 workers killed in a...

Storyline:This sequel to the award-winning "ETs Among Us" covers uncharted territory: history of Antarctica and ongoing UFO connections, secret history of Mars and parallels with Moon and Antarctica, underwater ET bas...

Storyline:Casanova is in love with Francesca, who thinks he is a friend of himself even though he is engaged to Victoria, who is the love of Giovanni, Francesca's brother. Francesca is betrothed to Paprizzio who think...

Storyline:Jack and Melissa are frightened by their son's bizarre and violent behavior; they soon learn that he is the gateway to the Apocalypse, and it will happen on his birthday, 11-11-11.User Reviews: The Asylum's ...