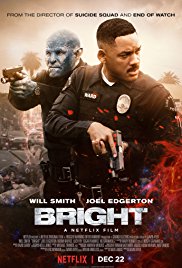 Storyline:
In Los Angeles, humans live with orcs and elves in a world where fantasy creatures do exist. LAPD police officer Dayl Ward is the first human cop having the orc police officer Nick Jakoby as a partner. When Ward is shot by an orc and Jakoby does not capture the shooter, he questions whether Jakoby lets the fellow orc escape. During a patrol, Ward and Jakoby arrest a man that tells that there is a prophecy and Ward is blessed. Meanwhile, Internal Affairs press Ward to find the truth about the escape of the shooter so that they can fire Jakoby. The magic department of the FBI interrogates the man that belongs to the terrorist Shield of Light group which protects brights so that they can prepare for the return of the Dark Lord that will destroy the world. Ward and Jakoby are summoned to attend a disturbance and they stumble upon a Shield of Light safe-house where they arrest the elf Tikka and bag her magic wand. Soon they learn that Tikka is hunted down by the evil and powerful rogue elf…
Written by
Claudio Carvalho, Rio de Janeiro, Brazil
User Reviews: After reading about how poorly this movie was made and how much of a flop it was, I wasn’t very surprised to find that it was much better than the reviews were admitting to. While the world is vast and leaves some questions unanswered, that by no means makes the movie hard to follow or less enjoyable to watch. The action was fantastic, the characters were portrayed very well, and the humor was spread throughout to break the tension. I could see how much older viewers who aren’t accustomed to a fantasy setting might have a hard time to follow, but if you’re like me and prefer the fantasy genre you will most likely enjoy watching this movie.