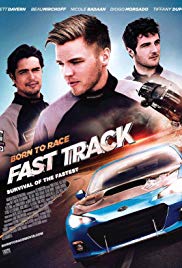 Storyline:
Danny Krueger is a twenty-year old street racer who plays by his own rules. After winning a scholarship to the prestigious Fast Lane Racing Academy, Danny finds himself competing against some of the fiercest young drivers in the world. Tension soars on and off the track, and a terrible incident leaves Danny without a racing partner. Facing dismissal from the academy, Danny is forced to team up with an old rival. The pair must learn to set aside their differences as they vie for rookie spots on a professional racing team.
Written by
Anonymous
User Reviews: I discovered the first Born to Race on Netflix and was pleasantly surprised for being a low budget film. Even though the plot was a little predictable, it still came off to be an entertaining independent film. This sequel however, was a huge let down. The only actor who returned for the second movie is the girl who plays Jessica. And the new Danny and Jake do not have the same on-screen tension as the actors in the first movie. It’s almost as if you can tell that these two are friends in real life which totally takes away from what is supposed to be an old rivalry. The plot was somewhat boring as I struggled to pay attention all the way through. I give it a 3 and that’s being generous.