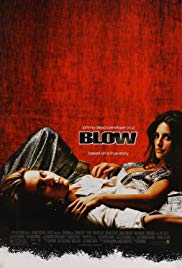 Storyline:
A boy named George Jung grows up in a struggling family in the 1950’s. His mother nags at her husband as he is trying to make a living for the family. It is finally revealed that George’s father cannot make a living and the family goes bankrupt. George does not want the same thing to happen to him, and his friend Tuna, in the 1960’s, suggests that he deal marijuana. He is a big hit in California in the 1960’s, yet he goes to jail, where he finds out about the wonders of cocaine. As a result, when released, he gets rich by bringing cocaine to America. However, he soon pays the price.
Written by
Anonymous
User Reviews: There’s something relentlessly self-serving about the (auto)biographies of criminals. There are too many plays for sympathy; a certain neatness in the way events always seem to absolve the criminal of blame; a sense of something being laid on a little too thick. So it is with ‘Blow’.

George Jung, as played by Johnny Depp, is a perpetual ingenue. His character is a catalogue of good looks and sweet gestures, and he has a downright saintliness in his dealings with others that’s so slick and saccharine that one can see the con coming from miles away. George is kind to his friends, generous to his business partners, oddly enough always the victim and never the perpetrator of double crossings, and by God, he loves his daughter. I was disappointed that there were no scenes of Johnny Depp administering aid to wounded animals, but it’s possible that these were cut to allow the film to run its current six hours in length.

While there’s a certain low humour in watching film-makers unknowingly playing the role of patsies, the warped and jagged caricatures Jung’s narrative makes of the other people in his story (the better to portray him as Christ) soon nip any fun in the bud. George’s mother (Rachel Griffiths, utterly wasted) is a cold, insatiate bitch; his wife (Penelope Cruz, hysterical) is a coke-mad, tantrum throwing ingrate, and his West Coast distributor (Paul Reubens, the less said the better) is a limp wristed fairy (largely, I suspect, so as not to threaten George’s position as the film’s only sympathetic, attractive, non-ethnic heterosexual male). It’s notable that the only female close to Jung who gets anything like a good rap is his flower-child stewardess fiancee Barbara, who rather conveniently drops dead before her relations with him have a chance to sour.

While it’s not exactly unentertaining – the film’s early-mid section works well as an evocation of sunlit good times – ‘Blow’s’ inherent manipulativeness is never far beneath the surface. Once things go bad for Jung, the film starts to sag in sympathy (literally) with him, and becomes instead a chronicle of Bad and Unjust Things Suffered with Commendable Stoicism by George Jung. My advice would be to have already left the theatre by this point. The ending is painfully overblown and drawn out, and we are forced to endure one of the more ‘off’ moments in recent cinema as the film primly castigates Jung’s daughter for not visiting her father in jail. I’m sure she has her reasons.