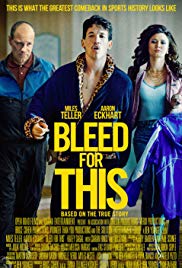 Storyline:
On November 1988, Vinny Pazienza boxes Roger Mayweather for the WBC World Light Welterweight Title. He arrives late to the weigh-in, as he has been riding a stationary bicycle in order to make the weight limit. Vinny’s final weight is 140 pounds even, which qualifies him for the fight. Instead of resting up for the fight, Vinny spends the night at a casino. The following day, he loses to Mayweather. At one point during the fight, Vinny is hit after the bell. His boxing manager Lou Duva causes a scene by going after Mayweather, but is punched as a result. Following the match, Duva tells the media that Vinny should retire from boxing. This angers Vinny’s father Angelo (who serves as his coach), and he confronts Duva. In the ensuing argument, Vinny announces that he wants another fight, and hires Kevin Rooney as his coach..
User Reviews: Ben Younger has been rather quiet in recent years with a short directorial filmography, Boiler Room being one of my favourite films, that being released sixteen years ago. Younger writes, screenplays and directs this true story of one of the greatest comebacks in not just boxing history, but in the history of sport itself.

Vinny Pazienza, now legally know as Vinny Paz was the IBF World Lightweight Champion and then later the WBA World Jr. Middleweight Champion but had to relinquish the championship belt due having his neck broken in a near fatal car accident being told by doctors that he may not walk again, let alone fight again.

Miles Teller portrays Paz meticulously, giving yet another powerful performance possibly equal to his Whiplash, being undecided. He portrays the painful struggle back to recovery and beyond with the almost medieval Halo brace Paz had screwed into his skull for three months, yet this did not deter his training much to the protests of the doctors, family and friends.

It’s got great performances from Aaron Eckhart, who plays legendary boxing trainer, Kevin Rooney, and Ciarán Hinds who plays his devoted father, going through the motions of glory to guilt, both having to deal with the decisions Paz makes which makes you question what you would do as friend or parent. Support him which could essential kill him? I think Eckhart is going for an Oscar nomination here.

It’s well paced and focuses more on Paz himself as oppose to the fights that are very well choreographed and captured. There’s impressive editing especially empathising the pain of both surgery, recovery and the blows, actually make some parts of the film uncomfortable to watch.

There’s a good, gentle score from Julia Holter that enforces the emotional strong of the story; and is accompanied by a selection of eighties classics with a few tracks from the eccentric Willis Earl Beal giving a moody bluesy mode to the film. Check out the track "Too Dry To Cry."

It’s great because, yes, it is a boxing movie, but it’s about getting back up, fighting the only real adversary of self doubt, especially when everyone, and I mean everyone from friends and family tell you no. Having the courage and determination to not accept defeat, or is it delusional to believe in yourself, knowing the risks. Either way, it makes a grand basis for an incredible story of the ultimate comeback.

Running Time: 9 The Cast: 9 Performance: 9 Direction: 9 Story: 9 Script: 8 Creativity: 8 Soundtrack: 8 Job Description: 8 The Extra Bonus Points: 0 Would I buy the Bluray?: Yes, going next to Cinderella Man and The Hurricane.