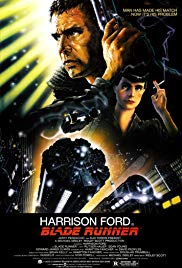 Storyline:
In the 21st century, a corporation develops human clones to be used as slaves in colonies outside the Earth, identified as replicants. In 2019, a former police officer is hired to hunt down a fugitive group of clones living undercover in Los Angeles.
Written by
MadMovieManiac
User Reviews: Blade Runner is perhaps the best sci-fi film and undoubtedly one of the best films of all time. Along with 2001: A Space Odyssey, it is one of the most philosophical and influential movies ever created, as it conveys a plethora of fundamental questions, which are woven in the very fabric of the human essence and existence. It seems near impossible to imagine a more suitable fusion of two of the most successful genres of all time, Science Fiction and Film Noir. By merging together the moral conflict and the emphatic character arc of the private detective, a trait that is exclusive to and definitive of the Film Noir genre, with a futuristic dystopian environment, Blade Runner creates the ultimate Neo-Noir setting, the only one capable of supporting such strong ideas and posing such significant questions to the viewer, without compromising on an interesting plot development and an appealing pace, things that are masterfully achieved via a tight script and persuasive performances.

In a dark, future dystopian portrait of a 2019 Los Angeles, where humans have alienated themselves with their true nature and claimed the title of god/creator of life, effectively manufacturing artificial intelligence and bioengineering androids, called "Replicants", a retired "Blade Runner" named Rick Deckard is assigned with the undertaking of terminating four rogue such replicants that have illegally returned to Earth in a quest to force their maker, Tyrel, into postponing their grim destiny, basically prolonging their already predetermined four-year lifespan. Their greatest sin, however, is having the audacity of desiring one of the most sought-after values in the history of the human species, the freedom to live as they please. In this uneasy and twisted world, the lines between humanness and machinery are blurred and Deckard is faced with the consequences of the realization that not all is as it seems and there is more to "being-alive" than most believe.

Blade Runner’s unique depiction of the future has been imitated numerous times quite unsuccessfully, mostly due to the fact that no other film to this date has managed to create such an engaging atmosphere so beautifully connected to every part of it, effectively enhancing every scene and allowing for a strong conveyance of all the moral and existential questions that are posed during the whole duration. The audience is instantaneously absorbed by the vivid and compelling world depicted in the film, and that’s where Ridley Scott succeeds the most, offering a glance into an original and somewhat disturbing reality that might very well be humanity’s near future. The cinematography is impeccable, the art direction is gorgeous and along with some of the best visual effects that have ever been used in film-making, creates one of the most realistic and visually stunning environments that have ever graced a motion picture to this day. Vangelis has also composed one of the best and most awe-inspiring scores of all time, effectively managing to capture the very essence of each scene, thus making all sound a significant and inseparable part of the whole cinematic experience that Blade Runner has to offer.

This thorough examination of what it means to be human isn’t, thankfully, to no avail, as a careful observant, is forced to question their beliefs and attempt to choose a side on dilemmas that are still discussed by philosophers to this day, such as the traits that define humanity, the relativity that characterizes concepts like right or wrong, good or evil, as well as the meaning of life itself. The moral and existential complexity of this reality that Blade Runner has offered to the world reaches depths unparalleled by the majority of the films available, therefore greatly distinguishing it from all others and thus emphasizing its uniqueness through the most complete portrayal of science fiction to date.