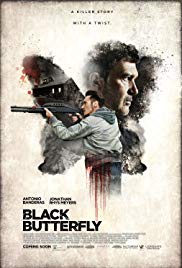 Storyline:
Outside a mountain town grappling with a series of abductions and murders, Paul (Antonio Banderas), a reclusive writer, struggles to start what he hopes will be a career-saving screenplay. After a tense encounter at a diner with a drifter named Jack (Jonathan Rhys Meyers), Paul offers Jack a place to stay-and soon the edgy, demanding Jack muscles his way into Paul’s work and the two men begin a jagged game of one-upmanship that will bring at least one tale to an end.
User Reviews: Good to see Jonathan Rhys Meyers in a good role since his star turn as Henry the Eighth. Antonio Banderas looked a little rough since I last saw him in a movie. The two actors played off each other well in this twisty tale about two clever fellows. I didn’t see it coming, as they say. Nice mystery/thriller for those who like the genre.