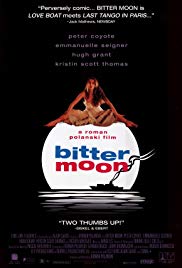 Storyline:
British couple Fiona and Nigel Dobson are sailing to Istanbul en route to India. They encounter a beautiful French woman, and that night Nigel meets her while dancing alone in the ship’s bar. Later he meets her crippled American husband Oscar, who tells him their story. While living in Paris for several years trying to be a writer, he becomes obsessed with a woman he met by chance on a bus. He tracks her down and they start a steamy love affair. Soon Oscar finds himself enslaved body and soul by her love, and continues to tell Nigel the details of this relationship in various stages over a number of visits to Oscar’s cabin.
Written by
Sami Al-Taher <[email protected]>
User Reviews: Not as much as underrated as much as forgotten, “Bitter Moon” is a stellar portrayal of a dysfunctional marital relations ans a story of the edge between love and madness which opens the question whether love can make all of us madmen. The movie contains powerhouse performances from all actors involved and the fact that whole plot is happening on a boat leaves a sense of claustrophobia and suffocating. However, the real story and background lie in the flashbacks of a leading actor, played by Peter Coyote whose intimate confession to a fellow passenger (played by Hugh Grant) about his marriage, pushes Hugh’s character in a bizarre triangle between his own wife (played by Kristin Scott Thomas) and Peter’s character’s wife (played by Emmanuelle Seigner). Both married couples are faced with desire, self-destruction and deceit in this poignant drama, which does carry a recognisable trademark of its director, Roman Polanski.

Storyline:An extremely captivating movie on how a little girl copes with her mother's death. She withdraws from all the people around her, waiting for her mother to come back. She tries waiting, and when her mother st...

Storyline:Oscar Mongoût, a gourmet cannibal, burns with love for the neighbor in his building, the very vegetal Miss Carrot. This passion seems destined to fail: she is a vegetarian, while he suffers from a total phob...

Storyline:Doug Dorsey is a hockey player for the US team in the 1988 winter Olympics. After a vicious game against West Germany. We then see figure skater, Kate Moseley doing her program and falling. Both have fought ...