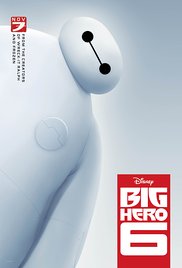 Storyline:
When a devastating event befalls the city of San Fransokyo and catapults Hiro into the midst of danger, he turns to Baymax and his close friends adrenaline junkie Go Go Tomago, neatnik Wasabi, chemistry whiz Honey Lemon and fanboy Fred. Determined to uncover the mystery, Hiro transforms his friends into a band of high-tech heroes called “Big Hero 6.”
Written by
Walt Disney Animation Studios
User Reviews: A childhood prodigy delivering on the grandest stage..awesome movie..just my kind of animation.plus there a humor that tickles you every time..although the ending is a bit sad. This kind of movie just make you like animated movies more and more as they depicts moves and effect that is never possible in a real movie..

Moreover, the whole good robot turning into a more cooler dark robot but still retaining its good behavior is an apple to the eye..also the upcoming a a new hero in a movie is always welcome for the viewers..This kind of movie fits viewer of all ages..whether you are 9 or 30..just awesome..and by the ways..it is one of the best animated movie in 2014..lets hope for more sequels…i suggest every user to watch it..