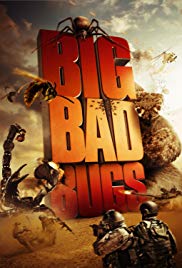 Storyline:
After a convoy of American soldiers disappears, a special ops team is deployed to rescue them. They soon encounter an army of gigantic scorpions, spiders and snakes that have come to Earth from another dimension.
User Reviews: I laughed. I cried. I watched from behind the sofa with my mouth open. I was stunned.

Don’t get me wrong, any amazement I felt at this movie was incredulity at the sheer amateurish antics of everyone involved with the making of this… this… I want to say film, but can’t. A film has some sort of structure – a plot, acting, cinematics. But this … thing… doesn’t have anything.

I’ve seen better, deeper, better filmed and more thoughtful movies in the epic fails section on YouTube. This was made by a group of less talented members of a high school film club, scripted by one of their primary school siblings using an encyclopedia of clichés, and using clothes store mannequins so as not to pay real actors. Well, that is what it looks like, and I am probably doing down the film club here.

The acting is of the densest mahogany, the script is (very old) cheese from the very first word, the graphics are laughably bad attempts from the 1970’s, the music hand-recorded from inside an elevator, the lighting performed with flashlights. And the director can only aspire to the greatness of Ed Wood, astonishingly making even the atrociously bad Uwe Boll look like an auteur in comparison.

The worst fifteen minutes of my life! And they brought it out in 3D as well! Amazing!