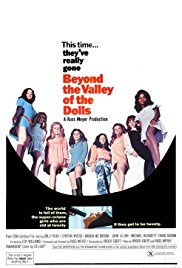 Storyline:
This film is a sequel in name only to Valley of the Dolls (1967). An all-girl rock band goes to Hollywood to make it big. There they find success, but luckily for us, they sink into a cesspool of decadence. This film has a sleeping woman performing on a gun which is in her mouth. It has women posing as men. It has lesbian sex scenes. It is also written by Roger Ebert, who had become friends with Russ Meyer after writing favorable reviews of several of his films.
Written by
Mark Logan <[email protected]>
User Reviews: I think Russ Meyer really topped himself with this one. It’s camp, but it’s camp created by truly TALENTED people. That’s what makes it so special. The dialogue is crisp and believable, and the performances (particularly the ones given by Michael Blodgett as "Lance Rock" and John LaZar as the immortal "Z Man") are actually pretty good. I am convinced that the climactic bloodbath in Z Man’s crib is Meyer’s take on the Sharon Tate murders (I imagine the scene was written before Manson reared his ugly head). Also, I love how Russ played the 20th Century Fox theme on the soundtrack during the decapitation of Lance! The man truly has guts!