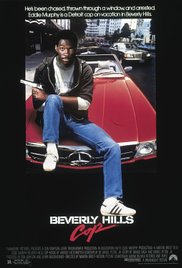 Storyline:
Detroit cop Axel Foley is delighted when he receives a surprise visit from his best friend Mikey Tandino, who lives in California. Not long after Mikey arrives in Detroit, Mikey is killed, right in front of Axel, by a man named Zack. Axel follows Zack to Beverly Hills, California, where Beverly Hills police department Lieutenant Andrew Bogomil assigns Detective Billy Rosewood and Rosewood’s partner, Sergeant John Taggart, to keep an eye on Axel. Axel visits his friend Jenny Summers, who works in an art gallery. With Jenny’s help, Axel discovers that Zack works for Jenny’s boss, Victor Maitland, the man who owns the art gallery. Maitland is a drug kingpin who is using the gallery as a front, and Maitland had Zack kill Mikey after Maitland accused Mikey of stealing some of Maitland’s bonds. With the help of Jenny, Billy, and Taggart, Axel does what he can to make sure Maitland and Zack won’t kill any more people.
Written by
Todd Baldridge
User Reviews: BEVERLY HILLS COP (1984) ***1/2 Eddie Murphy, Lisa Eilbacher, Ronny Cox, John Ashton, Judge Reinhold, Paul Reiser, Bronson Pinchot. Murphy, hot off his debut in `48 HRS’ wisely continued to ride his rising star in this his first starring vehicle, tailor-made for his fast-talking, fun-loving, street-smart persona as Detroit undercover cop Axel Foley in this blockbuster hit who heads to posh Beverly Hills to investigate the murder of a good friend mixed up in a drug smuggler’s art dealer front headed by equally good friend Eilbacher, and faster than you can say fish-out-of-water he’s rousted by Beverly Hills finest, Ashton and Reihold  a modern day Laurel and Hardy if you will, only to continue to fluster as he tries to unearth the muck in the richest city in America. Pinchot steals the show as the effete, espresso hawiking art shop clerk Serge. Lots of laughs and a good blend of action (this was once earmarked for Sylvester Stallone!) and sprinkled with pop tunes that led to an even bigger soundtrack goldmine. Waycool instrumental theme music via Harold Faltemeyer.