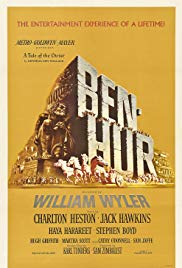 Storyline:
Judah Ben-Hur lives as a rich Jewish prince and merchant in Jerusalem at the beginning of the 1st century. Together with the new governor his old friend Messala arrives as commanding officer of the Roman legions. At first they are happy to meet after a long time but their different politic views separate them. During the welcome parade a roof tile falls down from Judah’s house and injures the governor. Although Messala knows they are not guilty, he sends Judah to the galleys and throws his mother and sister into prison. But Judah swears to come back and take revenge.
Written by
Matthias Scheler <[email protected]>
User Reviews: "Ben-Hur" is a dominant Best Picture Oscar winner that is perhaps more impressive now than it was when it was first released in 1959. Charlton Heston (Oscar-winning) stars as a rich Jewish nobleman during the time of Jesus Christ who is turned into a slave by the Romans after a freak accident. Now he is manning an oar in a ship’s galley and his family is imprisoned. Years pass and now Heston is after the former childhood friend (Stephen Boyd), a Roman, that turned against him. The 17 minutes of footage for the chariot race is some of the best during the history of the cinema. Hugh Griffith won a Best Supporting Actor Oscar and William Wyler won his third and final Best Director Oscar. A monumental film that is great in every cinematic category known to man. 5 stars out of 5.