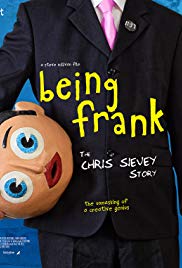 Storyline:
It’s a documentary about the life of eccentric comidian Frank Sidebottom who wore a huge paper mache’ head and whose true identity was a closely guarded secret until after died. The 2014 Magnolia Pictures film titled Frank was inspired by his sensational mystery.
Written by
Willow Dancer
User Reviews: I was one of the ‘backers’ (bit of a mogul you see) of this 7 years or so ago and have been eagerly awaiting the final flick ever since. There have been regular email updates from the director Steve in that time and the passion and effort that has gone in to it is staggering. Now having seen it myself I found it to be interesting, funny and touching and I’m even more grateful that I had the pleasure of meeting Frank (not Chris unfortunately) on the Magical Timperley Tour a decade ago, with my since passed old man. It’s not bobbins at all and I’d recommend it completely to fans and non fans alike.