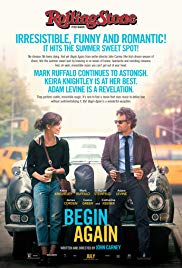 Storyline:
Gretta (Keira Knightley) and her long-time boyfriend Dave (Adam Levine) are college sweethearts and songwriting partners who decamp for New York when he lands a deal with a major label. But the trappings of his new-found fame soon tempt Dave to stray, and a reeling, lovelorn Gretta is left on her own. Her world takes a turn for the better when Dan (Mark Ruffalo), a disgraced record-label exec, stumbles upon her performing on an East Village stage and is immediately captivated by her raw talent. From this chance encounter emerges an enchanting portrait of a mutually transformative collaboration, set to the soundtrack of a summer in New York City.
Written by
The Weinstein Company
User Reviews: Once again, Carney wins me.

I’ll let the other reviewers introduce you to the characters and the plot, I’ll just say this — for me, this is a perfect movie. It took hold of me from the start, took me down to the depths, up to the heights, and never let me go until the last frame. Perfect execution: casting, performances, writing. The actors just nail it, especially Knightley and Ruffalo, though I would have liked to have seen more done with Catherine Keener.

I rarely watch movies twice, but there are people I want to share this with, and I ordered the soundtrack as soon as I returned home.

How will they finish this, I kept thinking toward the end. The answer? Perfectly.