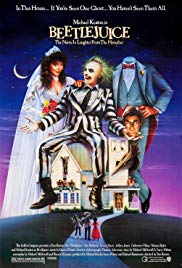 Storyline:
Adam and Barbara are a normal couple…who happen to be dead. They have given their precious time to decorate their house and make it their own, but unfortunately a family is moving in, and not quietly. Adam and Barbara try to scare them out, but end up becoming the main attraction to the money making family. They call upon Beetlejuice to help, but Beetlejuice has more in mind than just helping.
Written by
ahmetkozan
User Reviews: It may take two or three viewings to warm up to "Beetlejuice". It has a kooky, cockeyed sensibility and a rhythm that is by turns easy, lazy and frenetic. A charming couple in New England die and come back to their beloved home as ghosts, determined to rid the place of the horrendous new tenants. Possibly the most benign and engaging performance ever by Alec Baldwin; Geena Davis, Winona Ryder and Sylvia Sidney are also very appealing. The new couple from New York who take over the house (Jeffrey Jones and Catherine O’Hara) aren’t as well written or thought-out as the other characters and some of their bemused, dry-ice comic lines take a few seconds to reach you. Of course, there’s Michael Keaton, wildly comic as Betelgeuse. I recall hearing comments back in 1988 that Keaton wasn’t around enough to make the picture worthwhile, but that’s only if you watch the film for the fast quips and sight-gags. Keaton is truly wonderful, but he’s also bombastic, and I felt there was just enough of him to satisfy–it’s really not his story anyway, it belongs to Baldwin and Davis; Betelgeuse is used as a horny, vulgar punchline. Director Tim Burton is very careful not to overload the movie with raunch; he is surprisingly careful in setting up this story, and he works magic within a dubious scenario: a comic fantasy about dead folks which ultimately celebrates life. ***1/2 from ****