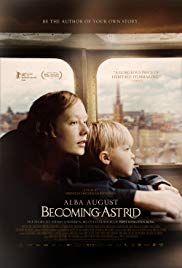 Storyline:
Biopic of Swedish writer Astrid Lindgren, the author of numerous children’s books and creator of Pippi Longstocking.
User Reviews: This is a beautiful piece of Scandinavian film making that held me spellbound from the first minute. The story of Astrid Ericsson’s (later Lindgren) early life unfolds lyrically, with sensitive handling of the many controversies that shaped the children’s author. While the cinematography is beautiful, and all performances are great, Alba August carries the film with a magical performance as Astrid. Every moment is perfectly told through August’s acting, and caught by the director.

I would say that this film isn’t quite as subtle as some Scandinavian films, but it’s always difficult to fit life stories into a single film. This film made me want to see a series of films about Lindgren’s entire life.

Storyline:A passionate tale of love and liberation set amidst the conservative confines of modern Georgian society, AND THEN WE DANCED follows Merab, a devoted dancer who has been training for years with his partner M...

Storyline:Six year old Johan, a.k.a. Fimpen, loves football. One day his talents are discovered. It doesn't take long before Fimpen gets to travel around with the national team. Fimpen becomes an idol and media wants ...