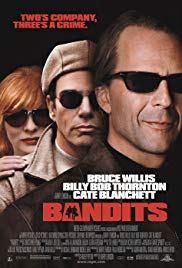 Storyline:
Two convicts, one charismatic (Willis) and the other a hypochondriac (Thornton), break out of prison and immediately start a bank robbing spree, kidnapping bank managers, spending the night with their families, then going with the managers in the morning to rob the banks. Using a dim-witted stunt man as their getaway driver and lookout, the three successfully pull off several jobs (even gaining the attention of a television show about American criminals), and become known as “The Sleepover Bandits.” Things are going great until the bank managers begin to realize that the robbers are non-violent and therefore no threat to them or their employees, changing the game for the Bandits. To add to the complications, a bored & unhappy housewife (Blanchett) ends up in the hands of the criminals, and begins to have romantic feelings for both Willis and Thornton, causing a sticky love triangle.
Written by
John Sacksteder <[email protected]>
User Reviews: Bandits is an interesting original film about two outlaws, Joe Blake and Terry Collins (Bruce Willis and Billy Bob Thornton) whom, after escaping from prison decide to continue their bank robbing spree but with a different tactic. They kidnap the bank manager,take him to work the following morning and get him to open the vault without the complications of tellers and customers. This works successfully until they run into Kate (played to perfection by Cate Blanchett in an overlooked role).Kate is an overworked stressed out housewife who decides she needs some action in her dull life. She forms a romantic relationship with Joe and starts to rob banks with them, a little extreme for a mid- life crisis don’t you think?. Later in the film she falls for Terry. Cate becomes torn between the two and a rift is formed between the thieves. This is the interesting dilemma explored in this film as the two cannot afford to be torn apart as all they have in life is each other.

This film is funnier than you would expect, it plays more as a comedy than a crime film. Willis nicely escapes his cop persona in the role of Smooth likable Joe Blake. Thornton is superbly funny as Collins, the neurotic paranoid partner. As aforementioned, Blanchett is perfect as the love interest.

The ending is enjoyable if not a little expected. The one big flaw in this film is that Thornton’s character, though entertaining is clearly not the criminal type. Though the relationship between the two main characters is touching.

Bandits is a funny, enjoyable, original comedy that I recommend to everyone. Go out and see this film. There will hardly be a moment in it that you will not adore.