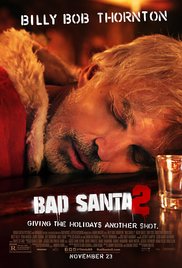 Storyline:
It’s the most wonderful time of the year again, and the not-in-the-slightest reformed safe-cracker Willie Soke is breathing the air of freedom once more, failing miserably to keep himself afloat thirteen whole years after his last achievements. Still addicted to alcohol and at the end of his tether, Soke will reluctantly accept his former sidekick Marcus’ truce and his daring plan for another Yuletide caper–this time targeting a Chicago charity on Christmas Eve. However, as Willie slips back into his Santa’s red suit again, much to his disappointment, he will discover that another partner in crime is also eager to join in the heist: his desperate for cash estranged mother, Sunny. Can Willie work around his mummy issues, especially now that the closest thing to family, Thurman Merman, comes to town for a visit?
Written by
Nick Riganas
User Reviews: BEWARE OF FALSE REVIEWS & REVIEWERS. SOME REVIEWERS HAVE ONLY ONE REVIEW TO THEIR NAME. NOW WHEN ITS A POSITIVE REVIEW THAT TELLS ME THEY WERE INVOLVED WITH THE FILM. IF ITS A NEGATIVE REVIEW THEN THEY MIGHT HAVE A GRUDGE AGAINST THE FILM . NOW I HAVE REVIEWED OVER 200 HOLIDAY FILMS. I HAVE NO AGENDA. I AM HONEST!

Don’t get me wrong. The original "Bad Santa" is a film I love to watch. Today when we were watching it struck me that there were 3 Academy Award Winners in "Bad Santa 2" Kathy Bates Won Best Actress for "Misery" Octavia Spenser won Best Supporting Actress for "The Help". Billy Bob Thornton won An Academy Award for Best Original Screenplay for "Sling-blade"

So why it is obvious all of them must of been paid well to do this film. Now I loved the original film. This film is okay but I will not go out of my way to watch it again!

In this film its been 10 years since the events of the original film. Fueled by cheap whiskey, greed and hatred, Willie Soke (Billy Bob Thornton) teams up with his angry little sidekick, Marcus, to knock off a Chicago charity on Christmas Eve. Along for the ride is chubby and cheery and now grown-up Thurman Merman, a 250-pound ray of sunshine who brings out Willie’s sliver of humanity. Mommy issues arise when the pair are joined by Willie’s horror story of a mother, Sunny Soke, who raises the bar for the gang’s ambitions, while somehow lowering the standards of criminal behavior.

There is some big laughs in this film. There is just not as many as the first one. I was disappointed because the first one was a laugh a minute! This film is RATED R so parents keep children away from this film.

KEEP IN MIND if you don’t like crude behavior then don’t watch this. This film is raunchy but I could not help but to laugh.