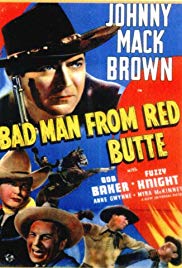 Storyline:
Buck arrives in the town where his outlaw twin brother Gil Brady is also located. Benson is after the Todhunter ranch and he has his henchman kill Todhunter. Then he claims Buck is actually Brady and he is the murderer. Buck is saved from the lynch mob by his friend Spud and must now find a way to prove Benson guilty.
Written by
Maurice VanAuken <[email protected]>
User Reviews: In Bad Man From Red Butte Johnny Mack Brown plays the dual role of surveyor and gunfighter. The surveyor carries the knowledge that he has a twin brother who is a notorious gunman as a deep dark secret. It only comes out after surveyor Brown is accused of killing rancher Lafe McKee. Of course the killing was ordered by the real villain of the story Norman Willis.

Surveyor Brown arrives with his sidekicks, Bob Baker who is a singing lawyer and has plans to hang up a shingle and practice law. But he’s soon involved in the politics of the town. Good thing he’s a cowboy singer, he brings his own entertainment to rallies. There’s also Fuzzy Knight who is his own entertainment and he’s looking to sell hair tonic with a kick to it.

The action keeps nicely moving in this Johnny Mack Brown western. Fans of the B western should be pleased.