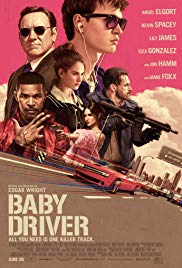 Storyline:
Baby is a young and partially hearing impaired getaway driver who can make any wild move while in motion with the right track playing. It’s a critical talent he needs to survive his indentured servitude to the crime boss, Doc, who values his role in his meticulously planned robberies. However, just when Baby thinks he is finally free and clear to have his own life with his new girlfriend, Debora, Doc coerces him back for another job. Now saddled with a crew of thugs too violently unstable to keep to Doc’s plans, Baby finds himself and everything he cares for in terrible danger. To survive and escape the coming maelstrom, it will take all of Baby’s skill, wits and daring, but even on the best track, can he make it when life is forcing him to face the music?
Written by
Kenneth Chisholm ([email protected])
User Reviews: I am someone who has enjoyed Edgar Wright’s work immensely. In fact, Hot Fuzz is one of my all-time favorite comedies. So obviously, I went to this movie with high expectations, knowing how much he can deliver a good time at the movies. After seeing it, I can say he most certainly did, although some things did drag it down from it standing toe-to-toe with his best.

First, the positives: the music direction is phenomenal. Nearly all the soundtrack utilizes a vast selection of music from the past 50 years, and it’s clever in how it doesn’t use super-overplayed songs (with a few intentional exceptions) and instead uses music most people have never heard before. This does a wonderful job of emphasizing Baby’s encyclopedic love for music. How the film cuts with the music is truly a work of art. Each chase scene felt like a exciting, but focused rush I usually don’t see in summer blockbusters.

The main character, Baby, has a backstory and arc that feels completely natural. His decisions throughout the film make sense relative to his situation, and Ansel Elgort does a great job portraying both social awkwardness and focused training. Most of the other characters are funny as well. Although I do feel like they could have fleshed out some of them more, most of them do get the job done. It is a bit disappointing, however, considering that even some superhero films this year did a better job with building their characters. Jamie Foxx does a stand-out performance which bought out most of the laughs for me.

Now for some drawbacks: the love interest fell completely flat for me. While Lily James’ performance is solid, the material feels, well, a bit lacking. I felt they needed to better justify her and Baby’s strong emotional bond. Since that spark isn’t quite there, I ended up questioning why she played along with the events of the movie. That reason isn’t quite given and it is distracting. Also, while the music is great, there are brief moments where they use a more traditional film score. If they wanted to show this bond Baby had with music, they should have completely immersed us in his ears, which they do, but in a couple scenes I felt as though they forgot or phoned it in. Silence can sometimes be as powerful as score, especially when it contrasts.

Despite some gripes, I do think Wright has made another solid addition to his short, but impressive, library of work. I do recommend you see this one in the theater if you get the chance, because we all know the last thing we need is another Edgar Wright film to bomb at the box office.