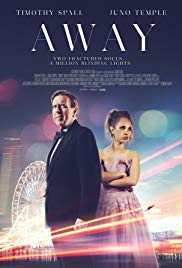 Storyline:
A story set in the north English seaside town of Blackpool and centered on two kindred spirits who form an unlikely friendship.
User Reviews: I thoroughly enjoyed this film. In today’s continuously challenging world , it hit some very strong chords with me. So often new films today seem to have little to say, often the same old story lines with slight twists. However, this really got me thinking about life, it’s complexities and the reality of the difficulties so many people face. Life’s journey is never simple, and every so often a film is released that captures something special …I think it will be very popular, especially with people who enjoy films that have more to them than the basic Hollywood stuff…some seriously good acting, and music fab.actually the music was superb! The story line has the ability to remind one that ,although you may have your own issues and challenges, you are not alone. In today’s environment so many people face daily survival and this film reminded me , there are many in the same boat. I think it’s a must see ,and is a film one could watch more than once to really capture its powerful symbolism .

Storyline:1970s USA, Three African American siblings on the run from the police take refuge at an abandoned Tennessee Ranch, unaware their hideout is on the hunting grounds of a cannibalistic Ku Klux Klan cult...Trapp...