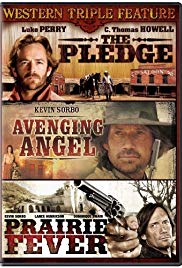 Storyline:
A preacher (Sorbo) becomes a bounty hunter after a group of refugees seeking shelter in his church is murdered by a gang of ruthless outlaws.
User Reviews: Preacher Kevin Sorbo’s family is killed by evil town boss Wings Hauser’s hired goons, after a family of homesteaders take refuge in his church. Not wanting to soil their memory by seeking vengeance, he instead becomes a bounty hunter in order to sate his desire for revenge, that is until he finds a real reason to take on the despicable Hauser and his villainous cronies.

A religion friendly movie, this is a bit familiar but it’s well written with lots of comic book style action. Sorbo is surprisingly good as a western hero and Hauser is great too as an urbane, educated heavy.

In all, Avenging Angel is quite enjoyable but the climax is a little too tame. The final scene between Hauser and Sorbo is good though.