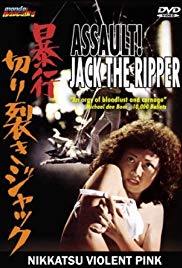 Storyline:
Two restaurant employees begin a torturous and sexual killing spree after they accidentally kill a hitch hiker and find that murder and mutilation is their mutual aphrodisiac.
User Reviews: A disgruntled waitress and a shy male pastry chef "accidentally" become serial killers when, while driving home one night, they pick up a crazed hitchhiker (kind of a female version of the guy in "The Texas Chainsaw Massacre") who strips out of her clothes, smears cake batter all over her body, and cuts herself with a razor blade. After they accidentally kill this nut-job, they have frenzied sex for the first time and realize that murder is a real turn on. . .

This movie is kind of a horror/black comedy like Oliver Stone’s "Natural Born Killers". But it doesn’t have the smug hypocritical "social commentary" of that film (i.e. preaching against violence in the media at the same time you’re wallowing in it). It’s also a Japanese "pink film" so it has a lot of gratuitous sex and nudity. It’s obviously very politically incorrect, so people who are always getting offended by movies (isn’t there enough stuff to get offended about in real life?) should probably avoid it. The truth is though where American movies tend to take murder with a grain of salt (and sometimes even make it entertaining), Japanese films do the same with murder AND rape. Thanks to years of misguided feminism, Americans tend to take the latter very seriously, but nobody is REALLY being raped in these movies anymore than they’re really being murdered. (Wouldn’t all the political energy be better spent by, I don’t know, trying to enforce the prosecution of REAL-LIFE rape as an international war crime or something?).

For what it’s worth, this movie is not as "rape-happy" as a lot of Japanese exploitation flicks. The far more disturbing thing is that this couple is sexually turned on by blood and violence. It is also, however, a very well made by a respected Japanese director. The lead actress is not very attractive in the conventional sense (although she is a lot more impressive with her clothes off), but this actually works well with her "outsider" character. The male lead is also very good, transforming believably from a shy male virgin to a raving psycho. This movie obviously isn’t for everyone, but if you’re the right kind of viewer and in the right frame of mind, you might very well enjoy it.

Storyline:A young woman just released from a mental hospital moves back in with her family. However, she is soon troubled by disturbing visions in which she commits a series of axe murders.User Reviews: The curiously ...

Storyline:Generel Sanada, seeking retribution for the murder of his father and a lost battle, both conceived by the Shogun, devises a series of brilliant plans to thwart the Shogun's overwhelming strength.User Reviews...

Storyline:One summer morning, Kiyoshi (Shosuke Hirose) is racing on his bike down the beach. While there, a girl with her clothes torn up is thrown out from a green convertible. This is how he and Sanae (Teresa Noda) ...

Storyline:A black clad woman murders a man that she had just met by chance through a phone sex club.User Reviews: