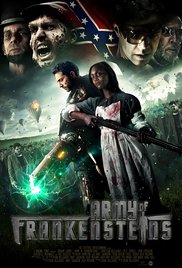 Storyline:
After a failed attempt to propose to his girlfriend, Alan Jones is beaten to within an inch of his life by a street gang and taken to a mysterious lab where Dr. Tanner Finski and his kid genius assistant perform horrible experiments on him hoping to re-animate a Frankenstein. The experiments lead to a hole being ripped in space and time, manifesting an Army of Frankensteins from hundreds of parallel universes and sending them all back to the 19th century, directly into the heart of a bloody battle between the North and South. History will never be the same.
Written by
Ryan Bellgardt
User Reviews: The people who starred in this movie were obviously a troop of civil war reenactment actors. The most expense had to be the false mustaches and beards. These people should never be allowed in a theater or allowed within 50 feet of a camera ever again.

I needed someone to pull my eye out only 20 to 30 minutes into this slop. Can anyone explain why the mad scientist needed a living eyeball to complete his creation? The eyeball was the MacGuffin device! It was the only thing that drove the plot. Honestly, I was very concerned about that eyeball.

Every time someone said "Frankenstein" they acted like they didn’t know what that meant. Yet Mary Shelly’s novel was published 40 to 50 years prior to this event. Maybe no one had read it? Books were not that popular back then in 1864.

I never knew Frankenstein monsters are lighter than air, since the untethered balloon won’t leave the ground until the monster is aboard. For some unknown reason, balloon rides with a former slave, now battlefield nurse, makes it cool you killed all those people because all along you just want to help. But when your Civil War balloon is shot down by World War 2 anti-aircraft fire, you are happy to have a lighter than air Frankenstein around.

The appearance of the video game character Megaman in this movie, was no surprise to me. At this point the drugs the writers were on clearly had taken effect. This reminds me, the writers should not be allowed near paper and pens, especially if the producers returned them to the asylum.

We couldn’t end this travesty without yet more insult to history but to the iconic President Lincoln as well. I seem to recall Lincoln was shot after the war. Oh well, it didn’t happen in this movie just as Hitler didn’t eat a bullet in the bunker for "Inglourious Basterds". Let’s make up some more history and have every child in America drooling at the TV.

Yes, there should be war crimes trials… for making this movie.