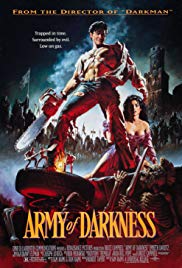 Storyline:
Ash is transported with his car to 1,300 A.D., where he is captured by Lord Arthur and turned slave with Duke Henry the Red and a couple of his men. When Ash is thrown into a pit, he defeats two monsters and wins respect of Arthur’s army and vassals. The Wiseman points Ash as The Chosen One that will retrieve the Necronomicon but Ash is only interested in returning home. When he learns that the only way to return to his time is using the Necronomicon, Ash decides to travel to the unholy land of the Deadites. The Wiseman advises that he must say the words “Klaatu Barada Nikto” to safely get the evil book. However, Ash forgets the last word and an army of the dead resurrects to attack Arthur fortress and recover the Necronomicon. The battle between the living and the dead is about to start and the support of Henry the Red is the only way to help Ash and Arthur to defeat the army of darkness.
Written by
Claudio Carvalho, Rio de Janeiro, Brazil
User Reviews: Sam Raimi’s Army of Darkness resides on a shelf alongside Metallica’s "Black" album and Monty Python’s Quest for the Holy Grail as required materials for 13 year-old males attempting to advance fully into puberty. Put simply, it must be watched and appreciated for male teens to fully grasp the nature of what it is to be a male teenager: cynical yet silly, horrific yet comedic, and filled with a bevy of violence and barbarism that only the middle ages and a K-Mart mock-up could provide.

For those who have forgotten or never had a 13 year-old male teenage-hood, this movie can easily fail as a juvenile exercise. Those who cannot find the magic in Bruce Campbell’s every glance, be it menacing, moronic, or Moe Howard-esquire will not enjoy the larger part of this movie’s outflowing slapstick and zingers. And of course, anyone looking for solid character development, plot, and a great catharsis beyond "good guy blows up bad guys" will run screaming in fear from this film. Despite it’s pseudo-independent status, it clearly doesn’t fit the ‘indie film’ paradigm of complex, deep characters dealing with universal problems. It deals with one oaf who happens to save humanity despite his best (and hilariously accidental) efforts to the contrary.

But the movie is not special only for its silly comedy. Sam Raimi, known most popularly nowadays for his work on the Spiderman series, showcases his signature style of cinematography in Army of Darkness, with unusual angles, quick-zooms, and stop-motion to create a style that is both off-settlingly jilting with the same type of jarring smoothness. The intro scene describes the book of the Necronomicon, with stop-motion animation showing words being inked into the book very jaggedly with a very scratching sound-set to compliment it. Yet at the same time it flows very fluidly, the words continuing to compile, and the scene playing out perfectly with the demonic setting. This style is perfect for the theme of the movie. His use of the steady-cam during a chase scene from the monster’s point of view is admirable, as is his ability to super-impose the ‘tiny’ Ashes with the Big Ash as flawlessly as could have been done pre-CGI (well, except for the rather obvious "Gulliver’s Travel" parody scene when they push closed his nostrils, which appears clearly bad).

Overall, this movie is the perfect melding of Sam Raimi and Bruce Campbell’s senses of humor and style. I think there may be no more funny facial expression in movies in the 90’s than when Bad Ash suddenly is confronted with a shotgun to the nose, as Bruce Campbell’s sudden bug-eyed expression drove me to howling peals the first time I saw that part. Their comic abilities create more than laughter though, they create a cultural landmark for those of us who were not quite generation X, nor generation Y, who sought identifiers as we aged. Much as generation X had the Breakfast Club, we have Army of Darkness, and for better or worse, it’s helped produce a generation that mixes an admiration for both the clever and the absurd, and can understand that situations can be both frightening and funny.

P.S. This movie can also serve as a social barometer for friendship. If anyone does not laugh at "This is my BOOM STICK", you know you should not be their friend.